The teacher who trended in the viral video for assaulting a pupil who was unable to read have been arrested by the police. 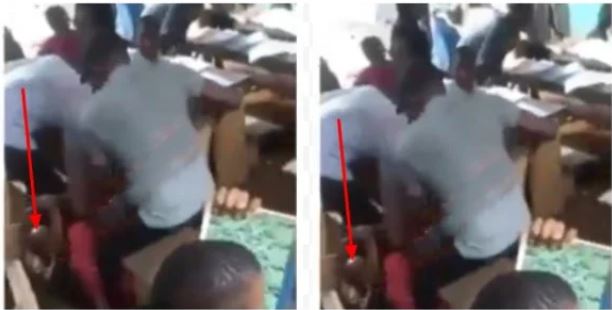 The Lagos State Police Command has arrested a teacher, Chuks Igbani, for allegedly brutalising a pupil in the Igborosun area of Badagry.

A clip that went viral on the social media reveals Igbani beating the pupil aggressively with a cane and pushing her against some furniture.

The pupil is heard saying she wants to die, as the teacher asks her to die while hitting her.

At a point in the video, the pupil agrees to read, but Igbani continues flogging her.

Some Nigerians on Twitter called for the arrest of the teacher and the shutdown of the centre.

@geedayyy wrote, “The teacher should just cool off in the prison for three months first before any trial starts. The little girl was even saying that she would read; that man is a beast and a monster.”

The state Police Public Relations Officer, Bala Elkana, said the teacher was arrested on Wednesday and would be charged.

“The man was arrested by policemen from the Badagry division and he is in custody,” he added.

However, the Public Affairs Officer, Ministry of Education, Kayode Abayomi, said the government had sent a team to investigate the incident.

He said, “The Ministry of Education has sent some staff to investigate it. The place is an unregistered centre, but the ministry still awaits the report of the team to know the next line of action. But one thing I am certain about is that once the centre is not approved by the state government, it will be closed down.”

Hon. Apata Samson Nunayon, the Supervisor for Education of the Badagry LGA, finally  effected the arrest of Chuks Igbani.

However, during his arrest, the teacher could be seen threatening to flog the students again in the presence of Hon. Apata.

. . Hon. Apata Samson Nunayon, the Supervisor for Education of the Badagry LGA, has effected the arrest of Chuks Igbani, the teacher recently videotaped brutally flogging a student over her inability to read properly. . . Chuks, who is the owner Sound Success College, Igborosun, was picked up earlier this week and he is currently at Badagry Divisional Police Station. . . However, during his arrest, the teacher could be seen threatening to flog the students again in the presence of Hon. Apata.