Stealing In The Name Of God: The Story Of 'Pastors' Who Have Turned Abuja Buses To Business Centres 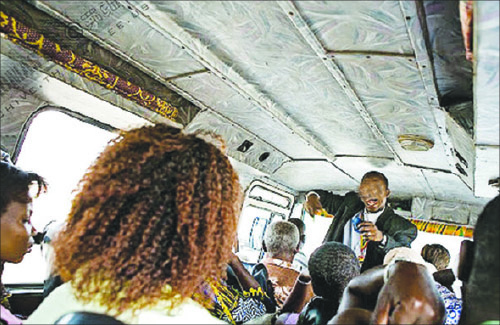 Call it telepathy or emotiveness, mobile preachers have capitalised, to their advantage, on the fragile spirituality of many residents of the Federal Capital Territory (FTC), Abuja.

They hinge on the strong perception of the residents that there are always mystical forces after their fortunes or misfortunes to eke out a living through prophetic pronouncements.

The long buses, called El-Rufai buses have become the preachers’ business centres. For them preaching to commuters in these buses has become a full time employment and fertile ground of acquiring wealth as they preach from morning till night.

They have won the souls, minds and admiration of civil servants, businessmen and women and the ordinary Abuja residents, using the long busses, leaving them with no option than to patronise them.

They are noticeable along all the bus routes, especially residents at the outskirts of the city centres. The popular bus routes they are never in short demand include Berger-Nyanya, Mararaba, Gwagwalada, Kubwa, Kuje, Gwagwa and Karimo.

Part of their modus operandi is to join the buses just as workers heading to work places or business places, preaching and making prophetic declarations to as many passengers that are interested and receiving offerings, which they deceptively call support for the ministry, at the end of each sermon.

For some of the residents of Abuja, who consistently patronise long buses along Wuse to Nyanya, Apo, Berger to Kubwa and Mpape axis of the city, it is stealing in the name of God, yet to others, they are the go-between to their spiritual affliction.

While some confessed that there is nothing wrong with bus preaching, others said what baffles them is the crafty manner they brazenly demand for offertory. They complained that some of them have turned it into a full time business as they are always permanently on the road preaching and indirectly begging people to support their ministry.

Despite the fact that most of them use God’s name to steal, many others have also started using it to sell their products in long buses in the town. They join the buses like every other passenger and when they see that the bus is filled they stand up, mostly seated conspicuously close to the conductor and ask the passengers to join them in prayers and after which they start marketing their products.

Most of these mobile marketers don’t pay transport fare because they assist the conductors in doing their job. But the mobile preachers pay because they board the bus like normal passengers, seat at any available position and do their businesses.

Taking ride with one of the buses to Nyanya and listening to the loud voice of the preachers confirmed the hectic situation passengers go through on daily basis.

A mobile preacher at AYA junction, told his “congregation”: “The life you are living is a battle and you must pray for your enemies to die for you to succeed in life, you kill or they kill you, let us pray.”

This diverted the attention of most of the passengers towards the seats as he continued preaching resulting in some passengers grumbling especially when he talked about women wearing men’s wears and make-up going to hell. It degenerated to a debate among the passengers and the bus became rowdy as everyone tried to have a say.

The most baffling one was when he said: “It is time to sow your seeds, support the kingdom work, support the ministry. The work of God must not die in our time. Let’s put our hands together and build the house of God.”

On announcing the financial request, most of the passengers started looking out of the bus windows while few gave the offering.

John Alana, a passenger, said preaching in buses is not a new trend to him. But, he insisted it should be discouraged because it can easily distract driver’s attention and lead to accident:

“I am not against preaching, religion is very good and I am a Christian. But when the driver is driving and a pastor is preaching, it has the propensity of dividing his attention. Some of the drivers are passionate about religion, and, so, when they get soaked too much into what the preacher is saying at that moment, his attention may be divided.

“I have been telling people that it must not be in the buses, why can’t they make it at the bus stops. It is very dangerous and the higher authorities should discourage before something terrible will happen.”

Moses Ade said although he is in support of those preaching in the buses because it can be the last message for the individual, he, however wanted it centred on salvation:

“It is the purpose of God that all men be saved. It is therefore a commission from Christ for those that are saved to go and reach the world, which includes ones locality.

“Christianity actually is all about relationship which most people don’t consider in reaching out to others. If truly they can be very brief and concise in their message, I believe they could make impact while preaching the world. After all, every message should centre on salvation.

“People are eager to hear the word that will make impact in their lives and it is the word of God alone that can do this. I believe if it is been done rightly, many souls will be won to the kingdom.”

Andrew Adeyi said he is not in support of those mobile preachers and would be the last person to give them money because they directly using the ministry to beg:

“These people that call themselves men of God and will not allow people to relax and think straight while in the bus are all criminals. Instead of them to go and hustle like others, they will be moving from one vehicle to the other collecting offerings and distributing their phone numbers to passengers that are miracles seekers.

“Do you know how much they make in a day? The last thing I will do is to give them my money. If I want to support the work of God, I will go and sow my seed in a real church and be sure that I am giving for ministerial work.

“Most of these preachers are not even born again let alone being called to have a ministry. This thing you see them doing is just their business and I can’t be part of it.”

A marketer, John Otaogba, who deals on herbal medications said: “We Nigerians are very passionate about religion, so if you want to get the attention of passengers you must use the word of God.

“Once you sing a song and pray you have gotten them. From there, you put in the business and everything works out for you but if you just board a bus and start introducing your products nobody will give you audience. It is not every driver that will accept because they complain that will make their buses noisy and also inconvenience their customers.”

A driver, Uchenna Ako, lamented that mobile marketers and preachers have turned out be a major challenge bus drivers are facing, decrying their nuisance factor:

“These preachers and marketers are trying to use their own business to destroy ours. If you don’t see a marketer in every trip, it will be a preacher. l don’t like it in my bus because they inconvenience my passengers.

“Again, the marketers don’t even pay transportation fair because most of them don’t seat down they assist us in looking for passengers but for the preachers, we collect our fare because they make a lot of money out of nothing.”