The holy city of Mecca has been deserted as the outbreak of coronavirus forces the Holy mosque to shut down temporarily. 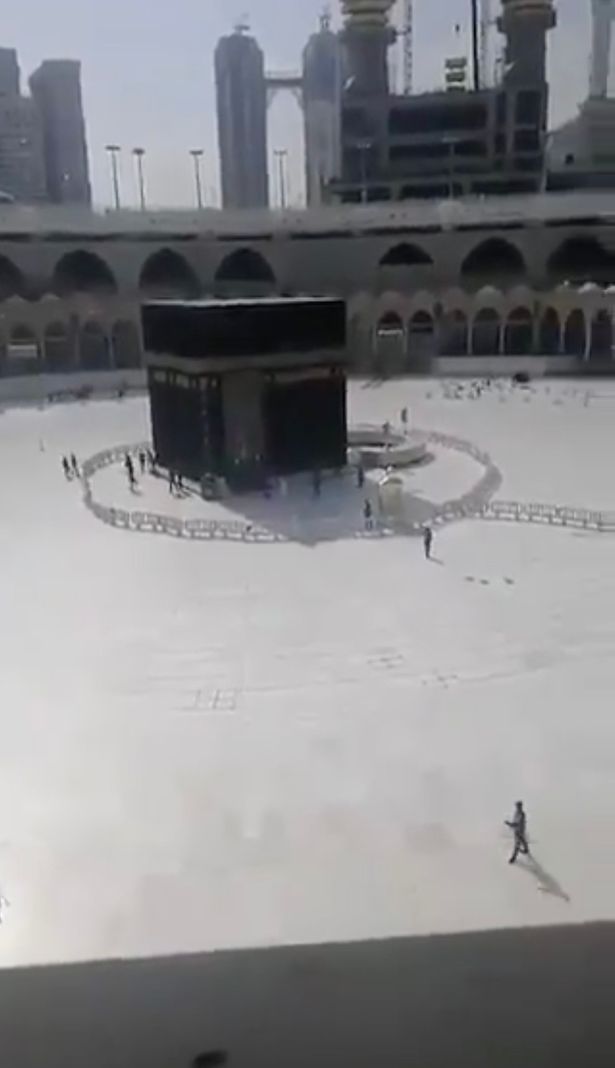 The courtyard of Islam's holiest site in Mecca, Saudi Arabia, has been filmed completely deserted after officials banned pilgrimages in an attempt to fight the coronavirus outbreak.

The Great Mosque of Mecca was shut down yesterday after thousands of people contracted the deadly COVID-19 in the Middle East.

Footage taken from the upper floor inside the mosque shows cleaners armed with dusters and disinfectant sprays sterilising the marble floor surrounding Kaaba.

Spray trucks are seen stationed inside the mosque and barriers are set up around the stone.

Viewers were shocked by the scene which would usually be filled with hundreds if not thousands of worshippers.

The circling area around Kaaba at the Holy Mosque in Mecca emptied temporarily to sanitize the area as #Coronavirus fears grow pic.twitter.com/sEUeFXrOAu

"I am seeing empty Kaaba first time in my life," one commented.

Islamic scholar Dr Yasir Qadhi tweeted: "Subhan Allah, the Ka'ba is empty, the tawaaf has stopped as the authorities clean the Haram because of the coronavirus scare. May Allah protect all of us!"

Saudi Arabia announced yesterday that the Grand Mosque in Mecca and the Prophet’s Mosque in Madinah will be closed an hour after the Isha prayer and will open an hour before Fajr (dawn) prayers each day.

A Saudi official said the deep-cleaning operation is a "temporary preventive measure" that is "unprecedented".

Upper floors remain open for prayers, he added. The area around Kaaba will remain closed until the Umrah ban is lifted.

Umrah, in Arabic meaning "visiting a populated place", it offers an opportunity for Muslims to refresh their faith, seek forgiveness and pray for their needs.

Saudi Arabia has halted umrah visas for foreigners and banned Gulf citizens from visiting the two cities because of the virus.

It also barred tourists from at least 25 countries where the virus has been found and on Tuesday it limited arrivals of travellers from Gulf Cooperation Council countries.