Some Kaduna villagers have spoken about how their villages were severely attacked by dangerous bandits. 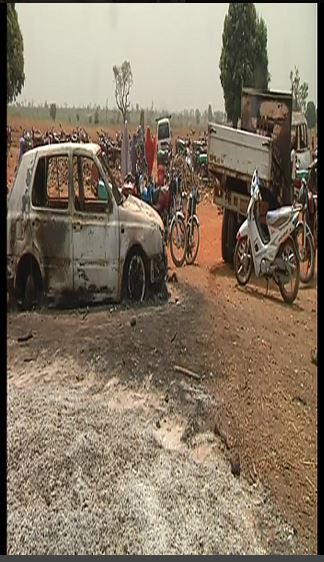 Villagers of communities bordering the dreaded forest of Birnin Gwari in Kaduna, woke up to the most horrific moment of their life last Sunday, scores of their kinsmen, including children, women and the aged were hacked to death in their cold blood. The survivors who recounted their ordeal said their attackers are no doubt Boko Haram terrorists. ABDULGAFAR ALABELEWE, reports.

For several months, people of Kerawa, Rago, Marina, Zariyawa, Hashimawa, and Unguwar Barau villages of Igabi and Giwa Local Government Areas of Kaduna state had lived at the mercy of armed bandits who terrorized, robbed and kidnapped them for ransome at will. The worst however happened last Sunday, as the terrorists descended on the communities, killing 51 of their kinsmen.

The attackers stormed the villages after the early morning Muslim prayers, shooting at every living soul on sight. Animals, food stuff, vehicles and motorcycles were also set ablaze by the assailants.

A survivor of the attacked Yahaya Adam said, only God can explain how he escaped the attackers bullets, saying his escape was miraculous.

Adam said, the attackers came in on about 100 motorcycles, each carrying two AK 47 rifles, but he initially thought they were just passing bye or fleeing their camp due to security operations around the bandits’ camps.

According to him, “It was around 6:00am that morning, we started hearing sounds of many motorcycles approaching our village and when we checked, it was the bandits. We were terrified by their number, but some of us just felt they were just passing bye. Because, to be honest, we were used to their presence around us; they do come into our villages, kidnap people and collect ransome.

“So, when we saw them, we never imagined they were coming with that kind of motive. We thought, they were either fleeing their camps due to security operation, or at worst coming to our village or another village to kidnap.

“So, me and the people I was together with were ready to run into hiding to escape being kidnapped. We never knew we were running away from death. All of a sudden, we started hearing gunshot, people started running and the bandits were chasing them with gunshots.

“They shot many people and went to Marina too and killed many people. At the end of the day, I could not explain how I escaped their bullets, because they came very close to where I was hiding and I heard gunshots very close.

“We are presently in a terrible situation, we cannot even go to our homes again, because, what we heard some of them saying is that, they will come back for us. They alleged that, we have been reporting them to the security operatives and they will punish us.” He narrated.

Abubakar Shuaibu in his own account said, their lives are in danger and they are now living in fear, as the bandits storm their villages, torment them and do it unchallenged.

According to Shuaibu, “the government should come to our aid. These people have become our nightmare. It is not something difficult for government to do. It is not that these people are faceless, we know them; they storm our villages everytime. In fact, most of the time, they do inform us before they come.

“For us, we don’t know why it is taking government a long time to end this banditry. We believe that the government has power to flush them out and that is our plea to the government.” He said.

Another survivor, Abubakar Muazu said, the bandits stormed their villages riding two persons each on about 120 motorcycles and all of them carrying AK 47 and other kind of guns they had never seen before.

According Muazu, “just like that the bandits invaded our village in the early morning of Sunday, each of them with AK47 rifle, some with AK49 and others with the one they call Dunner and other guns we don’t know.

“They were shooting sporadically like they manufacture bullets. They killed many people. They burnt vehicles worth tens of millions of Naira. We only escaped by God’s grace too, and we are scared too that, we might be the next to be killed.” He said.

A member of the vigilante group in the community’ said there was heavy presence of the police in the area after the grousome attack.

The villager said, there is not doubt that their attackers were not mere bandits, but members of the Boko Haram terrorists group who fled the North-East region of the country.

According to him, “what happened was unprecedented. We have never seen such kind of horror in our lives. These killers are Boko Haram. They stormed our village killing indiscriminately, they spared nobody, the young, the old, even Almajiris were not spared.

“They continued to shoot people, setting fire on the dead and on property. It was extremely horrific!’ They went from one room to the other, a man and his children were killed, even new born babies were not left out.

To there is a village close to us here called Marina, there is no living soul there again. They burnt down that completely. Between that village and own village, Kerawa alone, the bandits killed not less than 45 people. They spent about two hours destroying lives and property unchallenged.

“They burnt all the vehicles they saw on ground. They went away with all our motorcycles, except the ones they felt were not too good, but instead of living the bad motorcycles, they set them ablaze.

“Therefore, we are calling on government to do something drastic about it. We know where these people are, they are not hidden. The government should not ignore them because they have only attacked villages, because when they are done with villages, they will enter the cities.” He said.

Another survivor of the attack Abdullahi Kerawa said, the security situation requires attention of the Federal Government, saying that the attack happened because previous local security measures failed.

According to him, “We use to think we have seen the worst with the bandits tormenting us, kidnapping us and collecting ransome. But, what we saw this morning, was height of terror, as people were killed like chickens.

“We were in our village in morning after Subhi (Muslims morning prayer), these people just stormed our village, they started shooting at us, they didn’t spare even children and women. The old people were not left alone. They killed and even set some corpses ablaze.

“They went to our grain store and set it ablaze. Inside the grains store, there was over 1,000 bags of grains. Everything was burnt to hashes.

“To me these killers are not just bandits, they are Boko Haram terrorists, because they did not steal anything, they just killed and burnt peoples’ belongings.”

“We are appealing to the Federal Government to please, pay attention to the situation in Igabi Local Government Area, especially Igabi west. President Buhari should come to our rescue. Please deploy security agents that can do this work.

“We all must die one day and returned to Almighty Allah, even the bandits were saying so. Therefore, the government should fear Allah. We are in a terrible situation.” Abdullahi said.

Meanwhile, the Inspector General of Police, Mohammed Adamu, confirmed the suspicion of the villagers when he visited Kaduna on Wednesday to meet with top Police commanders over the attack. The IGP said, the bandits terrorising the North West region of the country are Boko Haram and ISWAP members.

The IGP however assured that, a repeat of the Kaduna attack will not happen under his watch, as he said that, loopholes that led to the Sunday morning attack have been identified and being blocked.

Earlier, Kaduna State Governor Nasir El-Rufa’i who visited the affected villages, disagreed with the villagers who claimed nothing was being done to protect them. The Governor said, but for security operatives’ intervention, the villages would have been completely wiped out.

The Governor however apologised to the villagers for government’s inability to completely protect them against the assailants and promised that, their attackers would be shown no mercy, as the state will not grant amnesty, but kill the killer bandits.