A tanker which was loaded with crude oil has rammed into a school in Onitsha, destroying three classrooms. 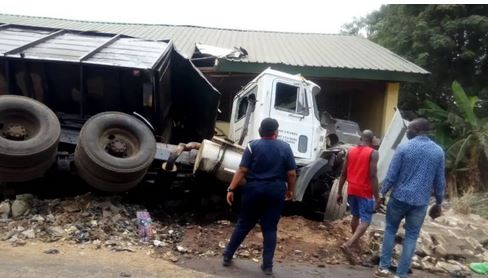 It waa gathered from the spokesperson for Anambra State Command of Nigeria Security and Civil Defence Corps (NSCDC), Mr Edwin Okadigbo, that the accident was caused by brake failure.

He stated that no loss of live or injury was registered in the accident, except the destruction of three classrooms in the school.

“Meanwhile, the area was cordoned off. Preliminary investigation indicates break failure and loss of control. No loss of life was recorded but three classrooms of new Bethel Primary School was damaged and the crude oil spilled into the classrooms and surroundings.”

A resident of the area who spoke to journalists expressed concern over the incident, saying that if it had happened on a weekday, it would have affected lots of school children.