A sex worker who murdered his boyfriend after an argument has finally confessed to the crime. 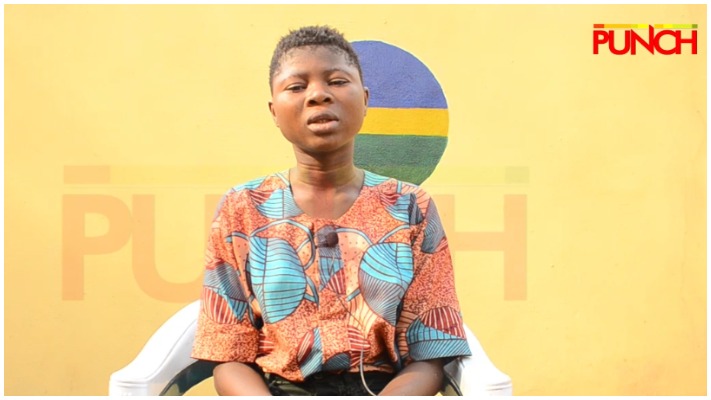 Abosede Idowu confessed to the crime
A teenager sex worker, Abosede Idowu who allegedly stabbed her boyfriend, Aliyu Ibrahim, to death over N3,000 has claimed that she did it in self defence.
During her arrest last week, the suspect was said to have stabbed Ibrahim in the chest after spending the night with him and allegedly taking N3,000 from his pocket the following morning.
The Police Public Relations Officer in the state, Abimbola Oyeyemi, said both Abosede and Ibrahim were seen dragging a knife with each other in the public before she allegedly stabbed him in the chest, which led to his death.
Oyeyemi said the suspect was arrested following a distress call by the Seriki Hausa in Sagamu to the Sagamu Divisional Police Headquarters.
The PPRO stated, “The suspect was arrested following a distress call received from the Seriki Hausa in Sagamu that the suspect and her deceased boyfriend were arguing over the sum of N3,000 as a result of which they were struggling with each other with a knife and eventually, the girl used the knife to stab her boyfriend in his chest, which resulted in his death.
“On receiving the distress call, the DPO Sagamu, SP Okiki Agunbiade, detailed his detectives to the scene, where the suspect was apprehended.
“The bloodstained knife, which she used to stab the deceased, was also recovered.”
The PPRO added that Abosede, while being interrogated, claimed that she passed the night in the deceased’s apartment and when she was about leaving in the morning, she took the sum of N3,000 from his pocket.
Oyeyemi said the action of the suspect angered the deceased, who insisted on retrieving the money from his girlfriend.
According to him, the deceased was not ready to give her the entire N3,000 and that was what led to the argument between them.
“The suspect further stated that it was the deceased, who brought out the knife and while struggling with him, the knife stabbed him in his chest,” Oyeyemi added.
Watch video below:
Top Stories