6 Kidnappers Arrested, 11 Others Surrender In Adamawa


Some suspected kidnappers have been arrested and paraded in Adamawa state by the police. 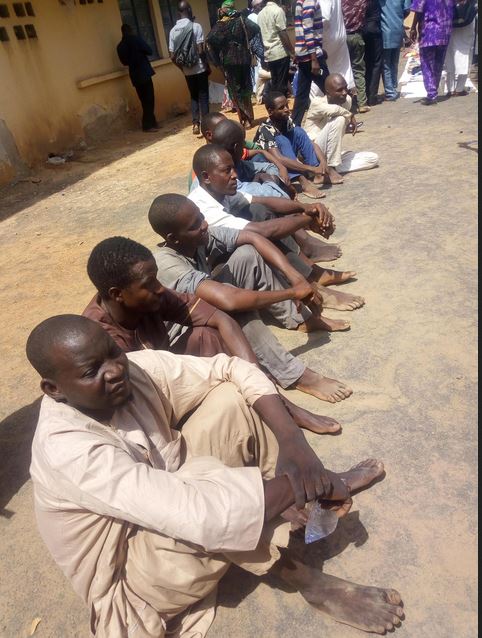 Six suspected kidnappers and 11 others who surrendered from the act of kidnapping were among 71 suspects paraded on Tuesday by the Adamawa State Police Command.

The state Police Commissioner, Audu Madaki, who paraded the suspects at the police headquarters in Yola, said the arrests and the voluntary surrender of the kidnappers resulted from a “hot chase” strategy of the command and members of vigilante groups.

Among the arrested kidnapping suspects were Mohammed Isa and Usman Yahaya, both 30 years old, who, with six others at large, who were said to have “conspired and kidnapped two people at Rome village of Dumne in Song local government area and Tambo village in Girei local government area in October last year and collected N2.5 million ransom.”

On the 11 ‘repentant kidnappers’, the police commissioner said, “The above suspects surrendered and submitted themselves to the state Chairman of Miyetti Allah Cattle Breeders Association of Nigeria (MACBAN) who in turn brought them before the police that they had been committing series of criminal activities but have decided never to do any of it anymore.”

Another suspect the commissioner presented to the public during the Tuesday parade was one Sgt Abdulrazak Dahiru, alleged to have been supplying ammunition to kidnappers.

The commissioner who said recent heightened efforts of the police had brought down activities of kidnappers across Adamawa State, expressed optimism that, especially with so many people surrendering their act and weapons, kidnapping would become virtually nonexistent in the state henceforth.

The police also arrested ‘Shilla Boys’, 48 in all, who were paraded side by side a huge collection of the drugs and weapons found in their possession, which the police commissioner said aid the young men in the violent petty thefts that they are known for.

Four people also paraded were alleged to have been involved in rape and sexual abuse of underage girls.

The four included 48-year-old Umar Adamu, 40-year-old Jauro Yahaya, as well as Julde Jattau and Musa Gambe who are aged 25 and 20 years respectively.