Some hungry monkeys stormed the streets of Thailand to look for food as they have been abandoned due to the Wuhan coronavirus. 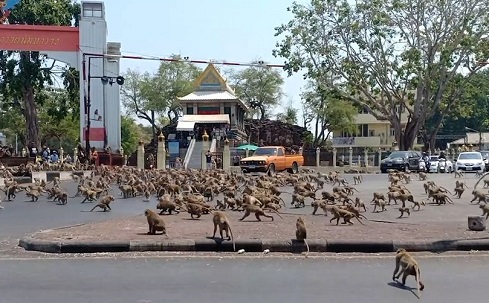 Hundreds of starving monkeys fought over a single banana that was left in the street, as tourists who regularly feed them shun Thailand.

The normally well-fed primates swarmed across a street in Lopubri, central Thailand, after they spotted a fellow monkey holding a banana.

A clip showed the primates giving chase to the unlucky monkey, who was doing his best to stay ahead of the pack.

But, it took a sinister turn as they started to shriek and fight over the measly fruit.

The monkeys are then seen jumping over one another and ferociously grabbing at each other as the battle for the banana escalated.

Bystanders were stunned and said the behaviour was totally out of character for the monkeys.

Onlooker Sasaluk Rattanchai, who filmed the banana brawl, said: “They looked more like wild dogs than monkeys. They went crazy for the single piece of food. I’ve never seen them this aggressive.”

She added: “I think the monkeys were very, very hungry.

“There’s normally a lot of tourists here to feed the monkeys but now there are not as many, because of the coronavirus .”

Lopburi is a popular tourist destination, where visitors typically feed the thousands of monkeys who live near temples in the city.

Local media claimed the hundreds of monkeys belonged to two rival gangs and had been squabbling over food as tourist numbers to the country plummeted. 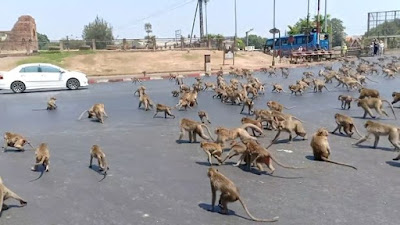