A member of the ruling All Progressives Congress has claimed President Buhari has a hand in the removal of Sanusi as Emir of Kano. 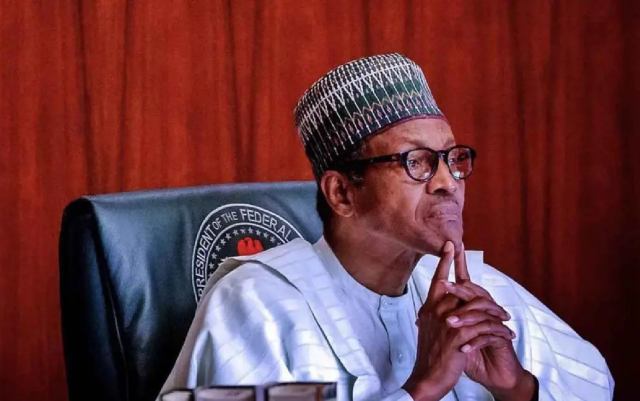 Muhammadu Buhari
A former presidential aspirant of the All Progressives Congress, APC, in the last general elections, SKC Ogbonnia, has claimed that President Muhammadu Buhari's denial that he has no hand in the removal of Muhammad Sanusi II as Emir of Kano is false.
He accused Buhari of aiding and abetting corruption.
According to Daily Post, the APC chieftain alleged that Buhari instigated the removal of Sanusi because of his opposing views against his government.
Recall that Ganduje was some time ago accused of stuffing dollars inside his cloth after being caught on camera.
“The dethronement of Sanusi is rooted in Buhari’s twin evil of selective justice and vendetta politics. It is a calculated vengeance against Sanusi for his opposing views on Buhari’s government. The president merely found a willing accomplice in Ganduje, who was equally determined take his pound of flesh against Sanusi,” Ogbonnia claimed.
“Lest we forget, there had been no love lost between Sanusi and Ganduje, after the governor was seen in a trove of video clips receiving bribes from a contractor and stuffing the proceeds in wads of dollars into his pocket. The bribery incident went viral and subsequently provoked worldwide outrage. Nigerians wanted action from both the state and federal levels.
“Instead of condemning the incident, President Buhari continued to shower stanzas of praises on the rogue governor. It was a mockery of the war against corruption under Buhari. In short, the president’s action or inaction is squarely the shameless juncture where the evil trajectory in Kano took a dramatic rise. Even the Kano State House of Assembly, which had commenced investigation of the governor, as required by the law, read Buhari’s body language and quickly swept the bribery case under the carpet, despite overwhelming evidence.
“There was never any sign of compunction from Governor Ganduje for his corrupt behaviour. As if that was not enough, the chairman of the ruling All Progressives Congress (APC), Adams Oshiomhole, landed in Kano within the same period to pass a vote of confidence on Ganduje, to the chagrin of the Nigerian masses.
“It did not come as a surprise that the governor was re-elected amid charges of monumental election rigging by federal government authorities. It did not come as a surprise that Emir Sanusi would be dethroned. It did not come as a surprise that the rogue governor would be allowed to deploy the federal police under President to banish and place the anticorruption king under house arrest in clear violation of his fundamental human rights and the Nigerian Constitution.
“The dethronement of Emir Sanusi portends a troubling future. The shameful incident hinges on the growing duplicity in Buhari’s war against corruption. It is a growing pattern of war against anticorruption advocates in the country. It is a war against the common good.”
Top Stories