Nigeria's number one man, Muhammadu Buhari has failed to visit the scene of the Lagos explosion some 72 hours after. 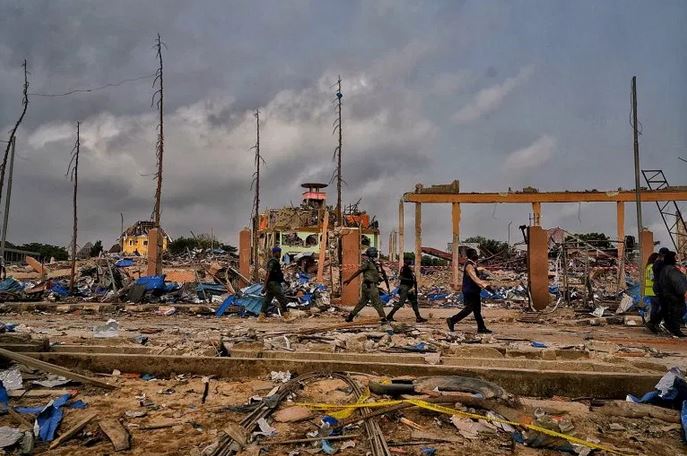 Almost 72 hours after a tragic explosion shook Abule Ado area of Lagos State killing at least 20 Nigerians, President Muhammadu Buhari is yet to visit the scene of the incident.

Rather, on Monday, the Lagos State Governor, Babajide Sanwo-Olu, jetted to Abuja to brief President Muhammadu Buhari about the Sunday accident and show him photographs.

The governor made this known in a tweet on Monday.

Apart from 20 people that were killed in the explosion that occurred at about 9 a.m. at the Abule Ado area of Lagos on Sunday, many Nigerians were injured with scores of houses, cars and properties damaged.

Mr Buhari has always been criticised for not showing empathy with Nigerians in periods of disaster.

Until he visited in February, critics had accused the president of not visiting Maiduguri and other parts of the northeast even as residents witnessed incessant attacks from Boko Haram terrorists. The same was said of the people of Zamfara and other parts of the Northwest where bandits have killed thousands of Nigerians.

On Monday, a day after the Lagos tragedy, Mr Buhari, apart from meeting with Mr Sanwo-Olu, also met with governors of his party, APC, over the crisis rocking the party.

PREMIUM TIMES reported how about 20 bodies have been recovered so far from the scene of the fatal explosion that occurred on Sunday in Lagos.
Emergency responders recovered three more bodies on Monday morning, in addition to 17 bodies that were earlier recovered, PREMIUM TIMES confirmed.

He also described the Abule-Ado explosion as a situation he has never seen before.

To many Nigerians resident in Lagos, although the casualty figures are quite different, the Abule Ado disaster had an impact somewhat similar to the bomb blast incident of January 2002.

On Sunday, January 27, 2002, an accidental detonation of a large stock of military high explosives at a storage facility in Lagos led to an explosion, killing many residents.

As scores fled the scene, many were trampled to death in the chaos as they tried to cross a canal that blocked their escape route. Rescue officials retrieved dozens of bodies afterwards.

Angry residents blamed the country’s military for the disaster, wanting to know why such old weapons store was allowed to house such powerful bombs inside the city.

Nigerian President at the time, Olusegun Obasanjo, immediately visited the scene the next morning to commiserate with affected Nigerians. He also described the incident as a monumental tragedy and demanded answers.

“There is the normal thing that we do, or that the military will have to do, which is when a situation like this occurs, the military must carry our an inquiry,” Mr Obasanjo said at the time, calming frayed nerves.

Nigeria also observed a day of mourning for victims of the explosions while government flags flew at half-mast.

On Monday, when Mr Sanwo-Olu announced that he took photographs of the scenes to Mr Buhari in Abuja, many Nigerians continued to pillory the president.

Demola Olanrewaju, a twitter user, described the development as inappropriate.

“You think you’ve seen enough silliness across the rank and file of the party in power then they dig and find another low to bring us to: What is the point of taking pixes to Aso Rock, is Sanwo-Olu dumb to explain verbally or Buhari deaf to listen? And they released the pixes.”

Henry Shield, another commentator, pilloried Mr Buhari on his twitter handle, saying the journey is just forty minutes away.

He tweeted: “The blast occurred 40 minutes away by flight from where the President resides, but Governor Sanwo-Olu had to travel to Abuja to show Buhari FREAKING PICTURES? Your citizens died. Little kids were involved for heaven’s sake! Pictures! I’m just tired. I’m tired!”

@Segalink, another twitter user, wrote: “This is even funnier. If he is afraid of coming to Lagos for fear of infection, did Sanwo-Olu tender any test result that shows he is free from the infection before visiting the President without maintaining social distance? Is he not coming from the same Lagos? Okay now. ”

A career coach, Dipo Awojide, noted that it was disturbing that the president did not visit Lagos. He wrote: “Sanwo-Olu should have sent pictures to Buhari via Whatsapp? lool. Why couldn’t Buhari fly to Lagos to see for himself? That would have been the right thing to do. More so the pipelines are federal asset.”

Another user, Tosin Olugbenga, described the president as the “worst” Nigeria has seen. He wrote: “This is the worst President Nigeria ever had with zero empathy for human lives. A strategic city like Lagos experience such a magnitude of disaster, Buhari sat in Aso Rock and Sanwo-Olu flew to present him pictures of the devastating damages. Shameless!”