A man has been arrested after his wife outed him to the police for bringing an unknown human hand for dinner. 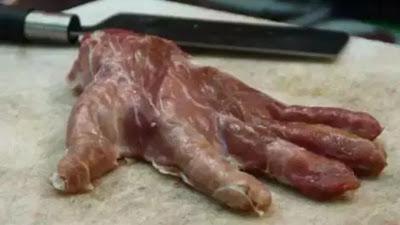 In a bizarre incident, a man brought home a human hand allegedly from a nearby crematorium and asked his wife to cook it for dinner in Uttar Pradesh’s Bijnor.

Upon seeing the chopped hand, the woman fell unconscious. To her horror, the woman woke up to find her husband, the accused, Sanjay, 32, making dinner preparations to cook the hand by himself, following which she locked him inside and rushed out of the house.

She first informed her neighbour and then called the cops. The man, said to be an alcoholic, has been arrested.

The shocking incident, which took place in Bijnor’s Tikkopur village on Monday, sent shock waves in the area.

According to initial probe, Sanjay went to the cremation ground and brought the flesh from there. Sanjay’s wife was horrified after seeing a human hand and fingers in the pan. She ran out of the house, alerted the neighbours and called the police.

The police also found that the man had even attacked his father a few days ago. However, the matter was not reported to the police.

Station house officer (SHO) RC Sharma said, “We visited the house of the man and found the human flesh. Police have detained the accused. Prima facie, he had brought it from the bank of Ganga where bodies are cremated.”