Despite the recent cases of coronavirus in the country, some school children were spotted at the airport for an excursion. 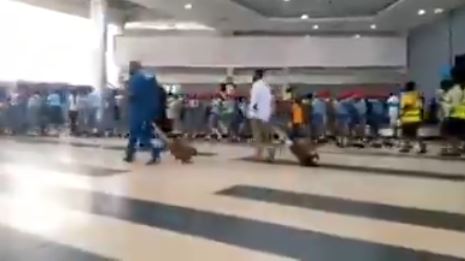 Pupils at the airport

A viral video has showed young Nigerian students on excursion to the airport, despite the growing number of coronavirus cases in the country.

Earlier today, the Federal Government of Nigeria confirmed 5 new cases of Coronavirus in the country. Four cases are in Lagos and while one is from Ekiti.

This was confirmed by the Minister of Health, Osagie Ehanire during a press briefing on Wednesday in Abuja, the nation’s capital.

The Minister explained that three of the victims came from the United States of America including a mother and child while two others also from the UK, who came via the nation’s land border.

The new confirmations bring the total number of cases in the country to 8.

Despite this, a video has showed the moment a group of students went on excursion to the airport.

After the video went viral on social media, Federal Airports Authority of Nigeria (FAAN) revealed that all airport excursions have been suspended, they wrote;

“Thank you for the feedback, we’ve directed that all school excursions be suspended. Thank You”

Pupils on excursion to the airport amidst Coronavirus fear.pic.twitter.com/J8MlSRvT0h