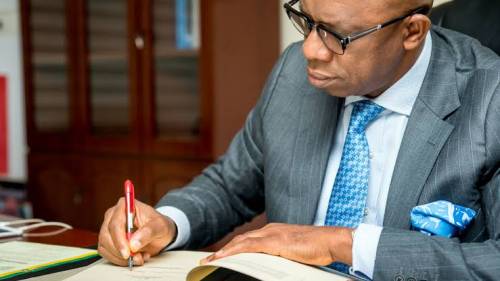 Ogun state governor, Dapo Abiodun
Ogun state government has taken drastic measures to curtail the spread of coronavirus by banning large gatherings in places like cinemas, sports arena, restaurants and night clubs for the next 30 days.
A statement released by the Chief Press Secretary to the state governor, Dapo Abiodun, Kunle Somorin, announcing the ban, reads:
"Further measures so far taken to ramp up its efforts to contain the spread of the coronavirus, the Ogun State Government has found it expedient to announce the following additional measures:
Immediate ban of all high-densitygatherings that would bring together 50 or more persons in the same place, such as social clubs, halls, cinemas, night clubs, restaurants, cafes, and sport arenas. This measure will be in effect for the next 30 days in the first instance.
This restriction has to be enforced without prejudice to people’s fundamental rights to association and movement, because safety of our people and their welfare are priorities that cannot be toyed with. The Government will continue to engage all the stakeholders, including our religious leaders to sensitise the populace on the need to maintain social distancing and collective effort to combat this pandemic.
The Government will continue the surveillance initiatives and intensify sensitisation onCOVID-19. This is more so given the peculiarity of its location as the Nation’s Gateway State and its industrial capital. Our epidemiologists and other health workers are working round the clock with Federal agencies and international development agencies to stop the spread of corona virus.
In view of the recent confirmed cases in the country, Governor Abiodun reassures the populace that no stone will be left unturned to ensure that the state is prepared at all times to respond appropriately. He furtherencourages people to maintain a high level of suspicion and report any suspected case to the appropriate authorities.”
Top Stories