Nigerian soldiers have been caught on camera rendering a melodious song while serving in the Northeast. 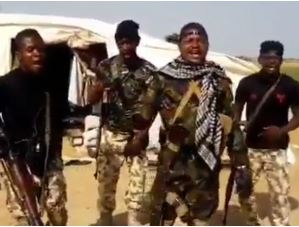 A video has emerged on social media showing Nigerian soldiers engaged in the production of a melodious song.

Some of the soldiers who are serving in the Northeast where they are fighting the Boko Haram sect, are seen in the video taking turns to sing while others behind the camera beat on makeshift musical instruments.

The video which shows soldiers singing with joy and glee as they made music, has since gone viral to the delight of many Nigerians.