Men of the Nigerian army have dealt ISWAP terrorists a serious blow after killing their leaders. 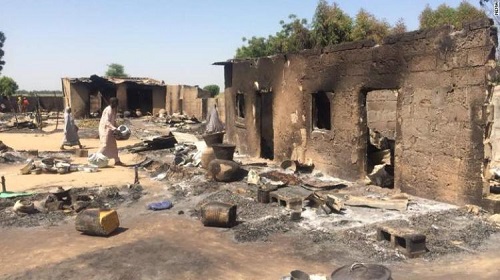 Soldiers kill ISWAP leaders in Borno
The Defence Headquarters says that several leaders of the Islamic State of West Africa Province, ISWAP, and fighters have been neutralised in a successful air interdiction mission by Nigerian forces at Alinwa in Borno.
The Acting-Director, Defence Media Operations, Bernard Onyeuko, disclosed this in a statement on Thursday in Abuja.
Mr Onyeuko added that the air strike also destroyed the dwellings of the terrorists as they gathered for meetings in a cluster of settlements West of Alinwa on the Lake Chad green fringes in Northern Borno on Wednesday.
He disclosed that the feat was achieved during the ongoing subsidiary Operation Decisive Edge.
According to him, the air strike was executed on the heels of impeccable intelligence reports, indicating that some top ISWAP Commanders with their fighters and designated suicide bombers had assembled at the location for meetings.
The meeting was aimed at orchestrating coordinated attacks against a number of targets in Borno and environs.
“Operation Lafiya Dole therefore dispatched its fighter jets to the location, recording devastating hits on many of the structures housing the ISWAP leaders and fighters, destroying them and neutralising their occupants.
“The Nigerian military will continue to sustain the offensive against the enemies of our nation.
“The Chief of Defence Staff, Gen. Gabriel Olonisakin, enjoins the troops of OPLD to maintain the momentum” he said.
NAN
Top Stories