Man Infected With Hantavirus Dies On Bus In China, Other Passengers Tested


A man has died on a bus after he tested positive for hantavirus causing other passengers to be tested also. 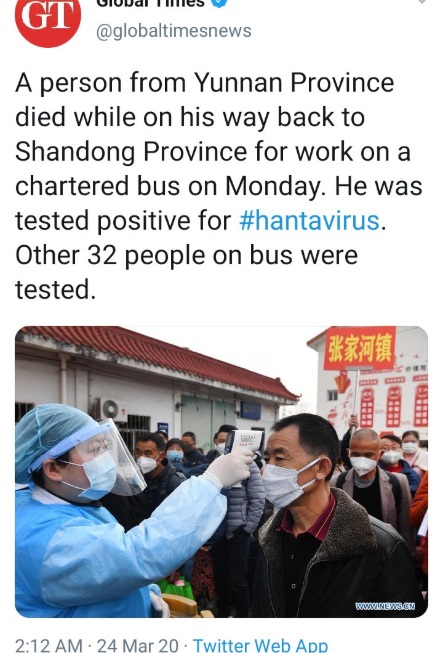 Man Infected With Hantavirus Dies On Bus In China, Other Passengers Tested

A man from China’s Yunnan Province, who tested positive for hantavirus, died on a bus, according to a report by the Global Times.

The media outlet further revealed that the 32 other passengers of the bus were also tested.

Hantavirus is a previously known family of viruses and is spread mainly by rodents and can cause varied disease syndromes in people but the cases of person-to-person transmission are rare and have only been reported from Chile and Argentina, according to the United States Centers for Disease Control and Prevention (CDC).

In most cases, hantavirus is spread when virus-containing particles from rodent urine, droppings, or saliva are stirred into the air, according to CDC.

Following the report of his death, Hantavirus became a trending topic on social media, with people panicking that it was another COVID-19 and could become a new pandemic.

However, it's been reported that Hantavirus is not a new virus and is not airborne, unlike coronavirus.Hantavirus is contracted when a person comes into contact with rodents that carry the virus.

"Rodent infestation in and around the home remains the primary risk for hantavirus exposure. Even healthy individuals are at risk for HPS infection if exposed to the virus," Centre for Disease Control and Prevention said in its website.

Although HPS can't be passed on from person to person, it can be contracted if someone touches their eyes, nose or mouth after touching rodent droppings, urine, or nesting materials, states Centers for Disease Control and Prevention fact sheet.

Among the early symptoms of the virus include fever, headache, muscle ache, abdominal pain, dizziness, chills and abdominal problems, such as nausea, vomiting, diarrhoea. About half of all HPS patients experience these symptoms. 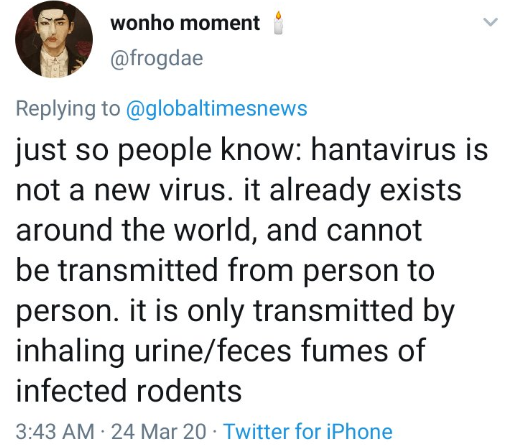 Late symptoms include lungs fill with fluid and shortness of breath.

A person from Yunnan Province died while on his way back to Shandong Province for work on a chartered bus on Monday. He was tested positive for #hantavirus. Other 32 people on bus were tested. pic.twitter.com/SXzBpWmHvW