Revealed: Check Out The Tremendous Amount Lagos, Ogun, And FCT May Lose To Lockdown


The investigation arrived at the amount based on an analysis of the nominal Gross Domestic Product of Lagos, Ogun and the FCT. 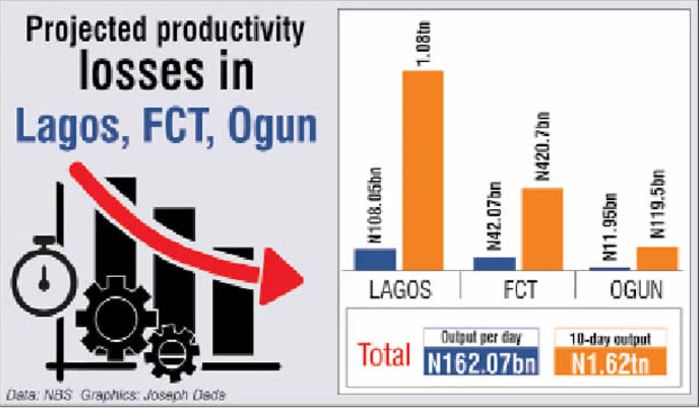 At least N1.62tn is expected to be lost in terms of monetary output by businesses and firms as a result of the two-week restriction of movement imposed on Lagos, Ogun and the Federal Capital Territory by the Federal Government.

The PUNCH arrived at the amount based on an analysis of the nominal Gross Domestic Product of Lagos, Ogun and the FCT.

The Federal Government had on Sunday restricted movements in two states and the FCT in a bid to check the spread of the coronavirus pandemic.

The coronavirus pandemic had led to unprecedented disruptions in supply chains, sharp drop in global crude oil prices, turmoil in global stock and financial markets, and lockdown in movements of persons in many countries among others.

Some of the major threats to the current projection for global economic growth include disruption to the global supply chain arising from the COVID-19 pandemic; oil price downturn as a result of subdued global demand and vulnerabilities in major financial markets.

Based on the analysis of the GDP figures, Lagos, Ogun and the FCT have a combined nominal GDP of about N40.49tn.

A breakdown of this figure shows that Lagos with N27.12tn has the highest nominal GDP followed by FCT with N10.56tn while Ogun had nominal GDP of about N2.81tn.

Based on the analysis by our correspondent, businesses in Lagos with a nominal GDP of N27.12tn are expected to lose daily output of N108.05bn

For the ten working days that the lockdown is expected to last, about N1.08tn is projected to be lost by businesses and firms.

For Ogun the state has a nominal GDP of N2.81tn with a daily average output of N11.95bn.

For the ten working days that the lockdown is expected to last, about N119.5bn is projected to be lost in terms of productivity.

The Minister of Finance, Budget and National Planning, Mrs Zainab Ahmed, had on Friday warned that the Nigerian economy could slide into recession if the coronavirus pandemic continues for the next six months.

She had said, “We are hopeful that this pandemic will be limited in time. If it is an average of three months, we should be able to close the year with positive growth.

“But if it goes longer than that – six months to one year – we will go into recession.”

Uwaleke in a telephone interview said that Nigeria’s revenue from oil would be seriously affected by the impact of COVID-19.

He said, “The implication for Nigeria is that world trade had dropped; trade between Nigeria and other countries will suffer; there will be more capital flight because foreign investors will move to an economy that is safer.

“It has implications for export particularly oil which would lead to lower revenue for Nigeria; our trade and investment will also fall.

“If care is not taken, except the CBN continues to defend the naira, it will affect exchange rate.”

To survive the economic crisis, he said, “We need to produce and prioritize our spending by spending more on food and pursue import substitution.”

In his comments, a professor of Economics at the Olabisi Onabanjo University Ago-Iwoye, Ogun, Sheriffdeen Tella, said it would take a while before the economy recovered from the pandemic.

“There is also uncertainty as to when production will start in many parts of the world. So, we are already in recession as it were.

“To come back to the production level we were before will take some time. The implication is that it will not be very easy for our oil which is our major product to pick up.

“This means that our own economy will be slower in picking up than those other developed economies.”