The police in Cross River state have arrested drivers and 26 passengers for 'invading' the state from Akwa Ibom. 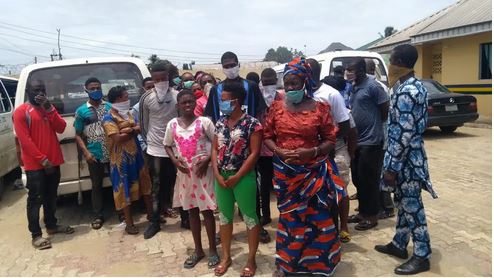 Parading the suspects on Thursday at Ikot Omin Police Station in Calabar Municipal Local Government Area of the state, the CP Anozia, said that the suspects were aware that there was closure of border between Cross River and Akwa Ibom States.

He said, “Everybody knows that the boundary between the two states have been closed because of the issue of the coronavirus pandemic, which has ravaged the entire world and Nigeria inclusive.

“About 3am on Thursday, the two buses with 26 passengers were arrested by our men along Eight Miles; the passengers and the drivers conspired to infiltrate Cross River State from Akwa Ibom State.

“We discovered that the passengers did not cross through the conventional road because nobody would have allowed them to do that but they used bush tract to get to a certain point where the vehicles conveyed them to Cross River State.

“I warned others who would want to adopt the same strategy to desist from it as the Police will sanction such persons” the CP warned, explaining that the suspects would have been charge to court for conduct likely to cause a breach of peace if not for the shutdown of court. He warned them to desist from such act.

“Unfortunately, the court is not in session and there is no place to take them to and the basis thing now is that since it is first offence, we will take them back to Akwa Ibom State and warn them against such conduct. Their vehicles however, have been impounded” CP Anozia stated.

When their vehicles were fixed, they saw the passengers and decided to pick them to Calabar, “We were coming in from Okurikang in Odukpani Local Government to Calabar and the Police arrested us at 8 Miles junction and took us to the Police State Ikot Omin

“We carried the passengers around 6.30pm on Wednesday but the vehicle had issue and we work on them and arrived where the Police arrested us about 2am on Thursday. We saw the passengers on the road but we don’t know where they came out from,” the drivers stated.