Wierd!! Woman Hatches Duck Egg By Carrying It In Her Bra For Over A Month


A woman revealed how she hatched a duckling by putting the egg in her bra for over a month. 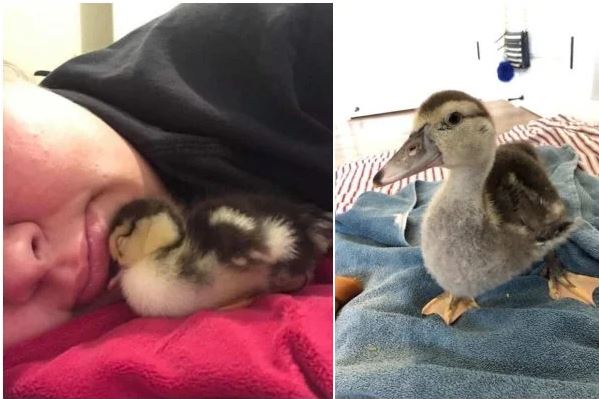 Betsy Ross from California is being praised by many for hatching a cracked duck egg she found in the park by carrying it in her bra for over a month, 35 days.

Betsy Ross was walking in the public park when she came across a smashed up duck nests, and was begged by her kids to save a lucky egg which had only a small crack.

She had never hatched an egg before, and she didn’t think she could save it, but the children were already upset because of the nests, so she said yes.

In an interview with Bored Panda, Betsy Ross revealed that she contacted a local wildlife rescue organization since she didn’t have an incubator but learned they didn’t take eggs.

She thought of the next best warm place to keep it and opted for her bra, close to her chest. A quick search online proved that she had chosen the right spot as the eggs basically require warmth and humidity. She also read that she had to rotate it a few times a day.

She said for the 35 days, the only time the egg wasn’t with her was when she showered as she handed it to her husband for a few minutes. She figured that if mother ducks left the nest every once in a while to get food, her egg would survive too.

The embryo inside the egg began to grow and Besty had to do more research on what to do when a duckling is hatching. She learned that it needed much more humidity and that she had to stop rotating it. Her bra wouldn’t do anymore, so she started a hatching box herself.

It wasn’t as smooth as one would think because a day after putting the duck egg in the hatching box, she noticed that something was wrong and called a vet.

It turned out that the duckling inside was being” shrink-wrapped in the membrane” and she had to peel away the shell and make sure the bird’s beak was where it could breathe.

The little duck eventually got out of the egg, but it was still attached to the yolk on the bottom, which, she was told, was because he had hatched a bit early. She later learned on Reddit that it was either because the incubation temperature was too low, or because the temperature wasn’t stable.

Even after the duckling absorbed the yolk, it was too weak to stand, or even move, for a couple of days, but its human mom didn’t give up on it, keeping an eye on it and giving it water from time to time. He (it turned out to be a male) eventually built up the strength to walk and Betsy built him a special carrier and took him everywhere with her.