The pastor lamented that the doctor and nurses on duty abandoned his wife after she was referred on emergency to the hospital by the Epe Primary Health Centre. 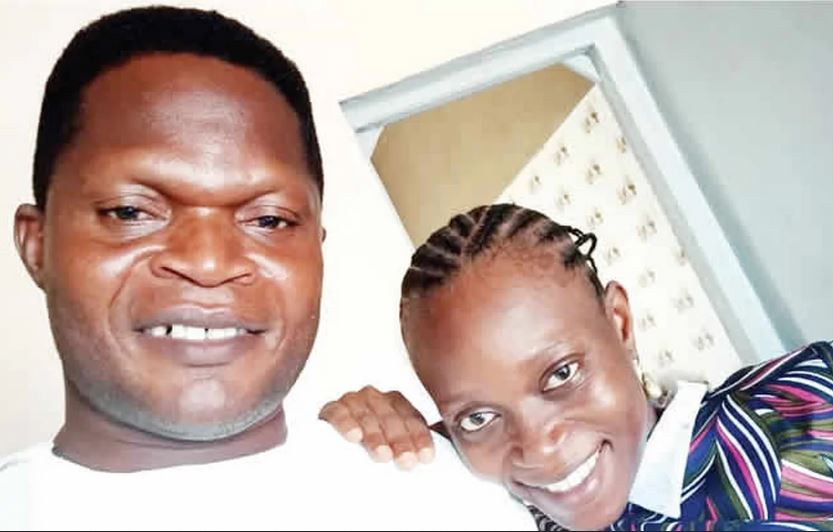 Taiwo and his wife, Oluremi

According to The PUNCH, a Lagos-based pastor, Ayobami Taiwo, has accused health workers at the Epe General Hospital of negligence, following the death of his wife, Oluremi Esan, during childbirth.

The 40-year-old Taiwo lamented that the doctor and nurses on duty abandoned his wife after she was referred on emergency to the hospital by the Epe Primary Health Centre.

He explained that it was discovered during a scan on April 13, 2020, that Oluremi had placenta previa and a Caesarean Section needed to be performed to save her life and that of the baby.

The pastor told PUNCH Metro that when he refused to buy a delivery kit that was claimed would be needed for the operation from the nurses, his wife was left unattended to by the doctor and the nurses.

Taiwo stated, “When we got to the doctor at the general hospital, he checked my wife’s file and said the case was a ‘time bomb’ and that Oluremi required a CS and I told him that was what we were told at the primary health centre and that I was told that my wife should not be allowed to have any contraction, because it would lead to us fighting for her life.

“The doctor said I should get four pints of blood ready and that he was still checking whether to book my wife for the CS for the following day or Thursday. The nurses told me to pay N29,000 for the delivery kit that was meant for someone else, who  eventually did not need it, but some items had been used from it; so, another health official told me to ask the doctor’s permission to buy from the nurses or he should give me a prescription to buy from the pharmacy.

“I went to meet him again around 9pm to ask for the situation of things and he said he would ask the nurses to admit my wife in the ward and watch over her and when I tried to explain to him that the situation was an emergency, he asked if I wanted to teach him his job.

“I went home around 10pm and I was on the phone with my wife till around 2am when I told her to go and sleep, but she called me back around 2.45am that she was feeling pain in her stomach and around 3.05am, she started bleeding, but what the nurses did was to put a fan in her direction and told her to lie down.

“When I got to the hospital around 6am, my wife was in a pool of her own blood and crying, because she was in excruciating pain. I immediately approached the doctor and nurses for help, but the same one forcing the delivery kit on us shouted at me and insulted me to leave her presence. Nothing I said could assuage her, not even the cries of my wife.”

Taiwo added that when the doctor and the nurses refused to attend to his wife, he went to the administrative block of the hospital and was able to get the numbers of some senior medical personnel, who offered the much needed help.

According to him, when he got back to the ward, the doctor, who had earlier refused to attend to his wife, told him that the delivery kit would be given to them for free, because Governor Babajide Sanwo-Olu had ordered that treatment for pregnant women in the state should be free of charge.

He added, “My wife, who had bled from 3am till around noon, was later wheeled into the theatre after losing so much blood. She was not comfortable after the operation and the doctor gave me a prescription to buy a drug.

“He asked if my wife had an underlying illness and I told him that she did not have. It was then it dawned on me that he was looking for a soft landing to wriggle out of the situation. My wife died because she bled for so long without medical attention.

“I beg you to help me get justice; I want the Lagos State Government to investigate and sanction the workers for their negligence and failure to uphold the Hippocratic Oath to save lives at all times.”

However, efforts to get the Chief Medical Director of the hospital, Dr Mustapha Bamidele, to comment on the incident proved abortive as his telephone rang out and a text message sent to him was not replied to as of the time of filing this report.

Also, the Commissioner for Health, Prof. Akin Abayomi, did not pick his calls nor replied to a text message sent to his mobile telephone.

However, the Public Relations Officer of the state Ministry of Health, Tunbosun Ogunbanwo, told our correspondent to send the details of the incident to him to enable the ministry to investigate the matter.

“I don’t have any knowledge of the matter, but it is something we are going to investigate. Please send me the details so that investigation can start immediately on it,” he stated.

As of the time of filing this report, Ogunbanwo had yet to feed back our correspondent with the findings.