A man who actually planned the kidnap of his own brother has made a startling confession about his role. 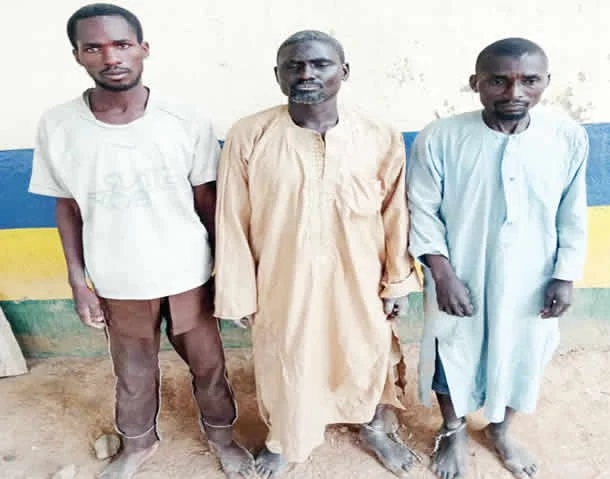 According to a report by The PUNCH, a 30-year-old farmer, Salahatu Haruna, has explained the role he played in the kidnap of his half-brother, Yakubu, whose seven-year-old son was shot dead during the operation.

Haruna reportedly masterminded Yakubu’s abduction to raise some money having become broke and reluctant to seek help from him.

It was learnt that the duo reside in the same compound at Bingiyaro area of Kaduna State and had maintained a cold relationship over the years.

He was said to have engaged some gangsters led by one Ikira who is still at large, to kidnap Yakubu.

It was gathered that Yakubu’s son was trying to escape on the night the gang struck, when the kingpin shot him in the head and whisked away his father. The kid died on the spot.

Yakubu was said to have been released after paying a ransom of N1m out of which Haruna got a share of N200,000.

The PUNCH reports that a petition was addressed to the Inspector-General of Police, Mohammed Adamu, who charged Intelligence Response Team to go after the perpetrators.

The detectives recently tracked down Isa, who led the team to arrest the mastermind and one Umaru Musa.

“The main suspect, Salahatu Haruna organised the kidnapping of his half-brother during which the seven-year-old boy was killed. He confessed to the kidnap. Another suspect, Yakubu Isa, also participated actively in the kidnapping. The third suspect, Umaru Musa, collected N10,000 share, from the ransom,” a police source told City Round.

Speaking with our correspondent, Haruna, who is married with two wives and nine children, confessed that he planned his half-brother’s abduction, adding that he got N200,000 share of the ransom.

He said, “My father is married to two wives and blessed with 12 children. My ‘brother,’ Yakubu Haruna, is also a famer and he cultivates maize. He is 40-year-old and the first child of my father. He built his own house but we both live in our father’s compound with our wives.

“I staged his kidnap because I had no food to feed my nine children and my wives. I was too ashamed to beg my brother for money because there is rivalry between my wives and my brother’s wives. I have been monitoring my brother to know when he had enough money with him.

“About four months ago, I invited three of my friends, Julie, Usman and Ikira and told them of my plan to kidnap him. They all agreed to the plan. Ikira brought an Ak-47 and we agreed that on the day they would strike, I would point the house to them. I did as planned that night, but the moment they broke his door, my brother’s seven-year-old son ran out of the house and Ikira shot him in the head. The boy died on the spot.”

Haruna explained that Julie, Usman and Ikira took Yakubu into a bush in Sabo-Bingiga, as neighbours gathered to sympathise with the family.

He said the kidnappers later contacted the family and demanded N3m ransom which was eventually negotiated to N1m. He stated that he used the N200,000 share he was given to cultivate tomatoes and buy a piece of land.

He stated, “A search party was not formed because everyone was overwhelmed with the killing of my brother’s son. The kidnappers contacted one of my uncles eight days after and demanded N3m ransom. We negotiated and one of our relatives, known as Musa took N1m to them. My brother was released after 10 days in captivity.

“Four days later, one of the kidnappers, Usman, brought my share of the ransom, N200,000, to my house. I gave Isa and Umaru N20,000 because they knew about the operation. The kidnappers picked the gun they used for the operation from where they (Usman and Umaru) kept it.

“I used N80,000 to cultivate tomatoes, which was destroyed by the flood and I bought a land with N100,000. Until my arrest, my family members were not aware that I masterminded the kidnapping of my brother. I am seriously pained over my actions. I got my innocent nephew killed. I want to be given a second chance.”

Isa, 35, said he kept the plan to kidnap Yakubu secret because he didn’t want to betray his friend, Haruna.

The father of six children claimed that he was sad when he learnt that Yakubu’s son was killed.

He said, “Haruna is my friend and we both trade in tomatoes. He once told me that he wanted to kidnap his ‘brother’ and I tried to convince him not to kidnap him. But Haruna told me that he had already perfected plans with people who would carry out the act.

“Two days before the kidnapping, Haruna brought an Ak-47 rifle to me and asked me to keep the gun for him. On the night they needed the rifle for the operation, the kidnapper collected the gun from me. I felt so sad when I heard that the seven-year-old boy was killed. All I got was just N10,000.”