Lockdown: Woman Delivers Baby At Roadside With Her Husband As Doctor [Photos]


A woman delivered her second child with her husband as the doctor by the roadside amid lockdown. 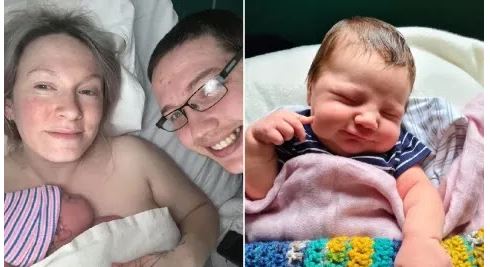 Woman Delivers Baby At Roadside With Her Husband As Doctor

When Sara Johnston realised she was going to be giving birth to her second baby in the middle of a pandemic, she thought her biggest problem would be getting someone to look after her older daughter when she was in labour.

With her mum over an hour’s drive away and her husband’s mum working in a hospital, she and her husband Chris, 33, were concerned about who would stay with Erin, two, when the time came.

They made plans for her mum to isolate and for her to drive straight over, as soon as they needed to go into hospital.

Sara, 32, went into labour at 38 weeks and four days and despite the difficult logistics, her mum made it as planned.

They ended up being grateful for the lockdown as halfway to the hospital, Sara realised they weren’t going to make it and her husband had to pull over on the side of a usually busy main road.

But because everyone is staying at home, barely anyone went past in the minutes she sat with her legs out of the car, while her husband delivered their second baby.

Seven minutes after she arrived, the paramedics found them and checked over mum and baby before taking them to hospital, while Chris followed behind.

After making sure everyone was ok, Sara, Quinn and Chris were able to go home to let Erin meet her baby sister at 4pm that same afternoon.

Sara says: ‘They’d told us before that Chris could be there for the delivery but would have to leave after she was born but because of everything that happened, he was able to stay with us in the hospital.

‘Everything was fine, she was feeding well and as it was my second baby, they let us go home. Since then, we’ve been doing great and she’s put on loads of weight.

‘We’ll still in shock though. We can’t believe she is here, never mind how she arrived.’