UPDATE: Niger State Commissioner Replies Critics Who Attacked Him For Buying A Phone Worth N400k As Birthday Gift To His Wife


Niger state Commissioner, Abdulmalik Sarkin Daji has addressed critics who attacked him for presenting a phone worth N400k to his wife on her birthday. 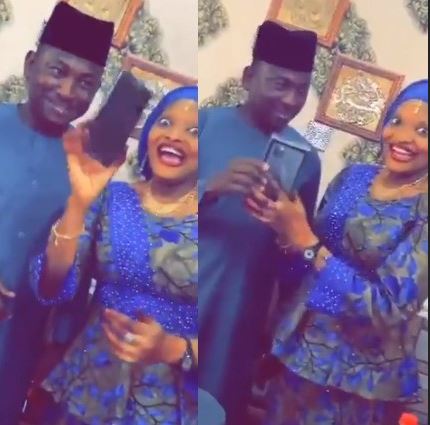 Over the weekend, the Commissioner for local government, community development and Chieftaincy Affairs in Niger state, Abdulmalik Sarkin Daji, had a family get together to celebrate his second wife who turned a year older. He presented an iPhone 11 Pro worth about N400, 000 to her as a birthday gift.

He shared a video that captured the moment he presented the phone to his excited wife, and this sparked outrage among some residents of the state. They accused him of been insensitive and flaunting his wealth even as they battle the economic hardship of the COVID19 pandemic.

A commenter on his Facebook page wrote: “This Commissioner is heartless. This shows he is making of our plight. ”

Another Facebook user, Aliyu Enagi commented: “25 workers salary @ 30,000 each. Allah ya karba. Imagine how many salaries this IPhone will pay?”

Another Facebook user, Muhammad Teekay also wrote with an emoji of outrage, ” 20% of my mum’s salary’.

The Commissioner has replied his critics after putting his Facebook page on private.

In an interview with The Nation, Daji said he was shocked that people can be angry that he gifted his own wife such a phone. He explained that as a successful legal practitioner, a two-time local government Chairman and now serving Commissioner, iPhone 11 should not be something he can not afford for his wife as a birthday gift.

“People buy a car for their wife if they have the means so why the condemnation that I bought a phone for my wife. Those reacting to this are just being mischievous, wicked and it is an attempt to tarnish my image because I am a Commissioner.

I did not even know the make of the phone. When it was given to me as a birthday gift, I decided to keep it for my wife’s birthday to give it to her especially as she had earlier indicated interest in it.

And again this is what I do every year for my wives and children even before I became Commissioner. I always make them feel special on their birthday, so I wondered why this is generating so many reactions on social media.

Even the birthday cake was made by my wife’s housemaid as her own gift to my wife. And in all honesty, there was nothing like a party, it was just family members, that is my first wife and her two sisters, my second wife, the children, and my self. There was no outsider there. I wonder why people are so uptight about me presenting a phone gift to my wife. It is my wife we are talking about, there is no gift too big to give to her.

Besides, I have been a local government Chairman before becoming a Commissioner, and before that I have been a big-time lawyer, so buying that type of phone for my wife should not raise eyebrows. I am more than capable to buy it.

Even if I was not doing well before I became a commissioner, at least my seven months salaries since becoming Commissioner, I should be able to afford a phone of N400, 000 for my wife.” he said

According to him, his first wife's birthday is coming up and he intends to give her a bigger gift.

“You see, funny enough my first wife’s birthday is coming up soon and I have decided to give her a bigger gift. People should stop seeing all of us as corrupt, I can afford these things, and I can confidently say that I have not mismanaged government’s resources or touched the salaries of local government staff.” he said.

Breaking News: Police Officer Opens Fire On His Colleagues In Lagos, Kills Some Of Them
Popular Stories