Bada was said to have died around Simeon Adebo Library in Kuto, Abeokuta, the state capital. 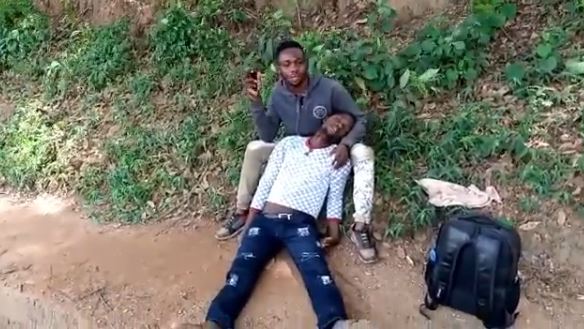 The man with his dead friend

Bada was said to have died around Simeon Adebo Library in Kuto, Abeokuta, the state capital.

When Punch Metro correspondent visited the scene, a young man, who identified himself as Victor was seen with Bada’s lifeless body by the roadside.

Victor said he was a friend to the deceased, explaining that they were travelling from Ijebu-Ode to Owode in Yewa-South area of the state when he died.

He added that a policeman whose identity he could not ascertain was taking them from Sagamu to Owode Idiroko, a border town in Ogun State when his friend died in his car.

He said the officer hurriedly dumped him and his deceased friend beside the road and sped off.

He said his late friend became sick on Saturday and was immediately rushed to a hospital in Ijebu-Igbo for treatment.

He said, “We met while we were working at a Quarry in Ijebu Ode.

“He became sick on Saturday and was immediately rushed to a hospital in Ijebu-Igbo but he returned the second day claiming he had recovered.

“On Monday, he relapsed and we rushed him to the same hospital. When I noticed that the condition was deteriorating, I called one of his relatives and the man said I should bring him to Owode. That was what made us left Ijebu-Ode for Owode before he broke down and finally died. I don’t really know the nature of his sickness.”

When asked whether he was coughing and running a high temperature, Victor said, “His temperature was not high and he was not coughing. If he had been coughing. What he was only saying was that, he felt weak.”

He warned the general public to avoid contact with the corpse while allaying the fear of any spread of COVID-19 in the state capital.

“This is to reassure the general Ogun State public, especially residents of Abeokuta, to remain calm, as regards the trending video of a male around Simeon Adebo Library, Kuto.

“I have contacted the appropriate authorities, including the Commissioner for Health and they are on top of the situation.

“The male and the second male with him will be immediately picked up, and the tracing of all their contacts will begin as treatment is given at the closest isolation centre in the state.

“Residents around the area are strongly advised to stay indoors and avoid going near the suspected patients,” he said.