A man is currently on the run after he stabbed his heavily pregnant girlfriend to death. 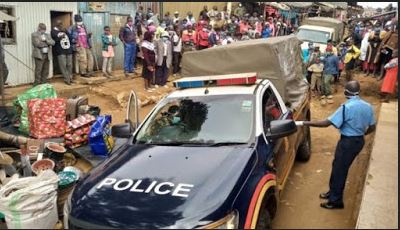 Police in Machakos have launched a hunt for a youthful man who fatally stabbed his heavily pregnant girlfriend, 27, on Saturday morning.

The woman, who works at one of the hotels at Mutituni Market in Machakos Town, Kenya was on her way to work at around 7am, when her boyfriend, identified only as Mutiso alias Kamondo, confronted her before whipping out a knife and stabbing her several times in the chest.

Though the exact term of the woman’s pregnancy wasn’t immediately ascertained, police say she was in her last trimester (between 7 and 9 months of pregnancy).

Police are yet to be establish why Mutiso killed his lover, though it is suspected the two had protracted relationship problems.

Residents familiar with the couple’s relationship said the lovers’ affair got turbulent the moment the 27-year-old woman got pregnant.

“They would argue time and again, and at one point they even lived separately before reuniting again,” the pair’s neighbour told K24 Digital.

Both the suspect and the victim worked at Makutano hotel in Mutituni Market.

A single yelp by the victim caught the attention of other passersby, who rushed to the scene and found the victim lying on the ground with blood gushing from her chest.

“She had been stabbed in the right side of her chest, and in the back,” said a witness.

Attempts to chase the suspect bore no fruit as he outran his pursuers.

In the last two months, the lovers were not staying together in the same house, though they shared a compound.

“The man rented a house adjacent to his girlfriend’s,” said a neighbour.

The victim’s body was taken from the scene at 9am and taken to Machakos Level 5 Hospital morgue. The knife that the suspect used in killing his lover was also found at the scene.

“We do not know where he ran to, but one thing we’re sure of, is that we’ll catch him,” said Karanja.

The incident drew anger in residents whom we spoke to, with all calling for the arrest and prosecution of Mutiso, whom they termed as a “non-native of Mutitini area”.

“As a parent, I am highly disappointed by what the young man did. Violence should not be an option when it comes to resolving relationship issues. His action forced us to close shop and leave for our homes; it was so horrifying and unfortunate,” said Ruth Mutala, a trader at Mutituni Market.