A dismissed soldier has been arrested while conveying 1,200 Kilograms of substance suspected to be Indian hemp to the Ikorodu area of Lagos. 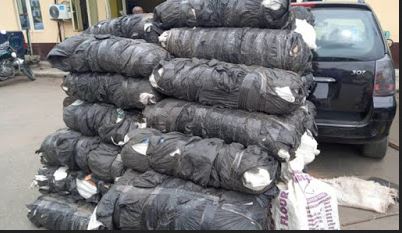 A man said to be a dismissed soldier and his accomplice who claims to be a serving soldier have been arrested by the police in Lagos State with 1,200 kilogrammes of substance suspected to be Indian hemp.

The image-maker in charge of the state police command, Bala Elkana, confirmed the arrest but could not ascertain if the soldier had been dismissed.

The two suspects were arrested with 24 sacks loaded with the substance.

The suspected dismissed soldier, Okoliko Andrew and the serving soldier, Idowu Adebayo, were arrested by the operatives of the state task force in the Ikorodu area of the state.

Tribune Online gathered that the duo were intercepted while driving through the Bus Rapid Transport (BRT) corridor around Itowolo area of Ikorodu.

The police task force team, while questioning them for taking the BRT corridor, perceived Indian hemp in their vehicle.

The duo introduced themselves as soldiers but the dismissed soldier could not convince the policemen which division he was attached to, raising suspicion on his identity.

According to the police image-maker, the suspects claimed they were to deliver the substance to someone at Sura Market at Lagos Island and that the owner promised to pay them N50,000 after delivering them.