The video was posted on the microblogging site, Twitter on Saturday by The Viral Trendz. 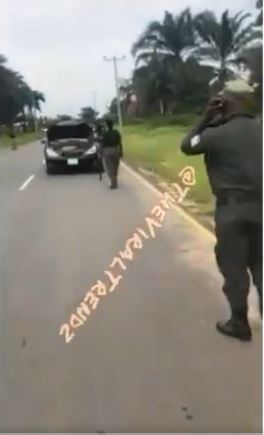 A Nigerian man in a video posted on Twitter has accused some police officers on a highway of forcefully removing his car battery because he refused to give them a bribe.

The video was posted on the microblogging site on Saturday by The Viral Trendz (@TheViralTrendz).

The Viral Trendz said on Twitter in its description of the video, “Nigerian police officers seen removing battery from a road user’s car as the driver allegedly refused to give bribe during a stop-and-Search.”

-- Nigerian Police Officers Seen Removing Battery From A Road User's Car As The Driver Allegedly Refused To Give Bribe During A Stop And Search. pic.twitter.com/Q0dzzchO7U

Two mobile police officers are seen in the video closing the bonnet of a Lexus car, as they walked away with the car battery, towards a police truck parked by the roadside.

Altogether, there were about five officers around the scene of the incident.

The man, apparently the car driver, is heard yelling at the police officers. His face is not shown in the video.

“You dey see wetin police dey do?” The unidentified driver said in Pidgin English. “You dey carry my battery, abi?

“The money wey you wan make for this road today, if you make am make I change my name. You no go make-am.”

Throughout the 21-seconds video, the officers were not seen or heard demanding bribe from the driver.

The Complaint Response Unit (@PoliceNG_CRU) of the Nigerian police has requested information on where and when the incident happened to aid in their investigation.