Aisha insinuated that the security details remained in detention despite her plea for their release, while they were not replaced. 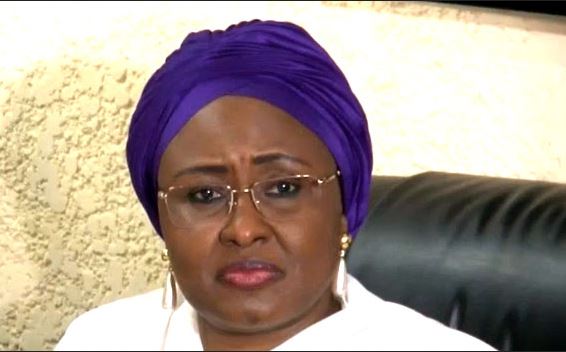 A report by Vanguard has shown that about 48 hours after alleged shooting at the Presidential Villa, Aso Rock, Abuja, the First Lady, Dr. Aisha Buhari, on Saturday, said her security details arrested in connection with the Thursday incident had neither been released nor replaced.

Aisha insinuated that the security details remained in detention despite her plea for their release, while they were not replaced, adding: “You don’t play with the protection of the First Family.”

Meanwhile the Peoples Democratic Party (PDP) asked President Muhammadu Buhari to speak out on the incident.

There had been reports of shooting at the Villa, on Thursday, by some security officials in pursuit of a presidential aide who had allegedly refused to isolate for COVID-19 after travelling out of the Federal Capital Territory (FCT).

The First Lady was said to have been infuriated by the aide’s action.

The aide, according to sources, fled and it was in the process of stopping him that shots were fired.

The incident apparently led to the arrest of Aisha’s security details on the orders of the Inspector-General of Police, Mohammed Adamu, as confirmed by the First Lady who demanded their release in a tweet.

Speaking exclusively to Vanguard, last night, Aisha, through her spokesperson, said she was not aware of sporadic gunshots at the Villa.

The Special Assistant on Media and Publicity to the First Lady, Aliyu Abdullahi, said: “We are not aware if there were sporadic gunshots at the Villa.

“What we gathered was that he (a presidential aide) was asked to go for self-isolation by security operatives in the Villa and he refused. They hinted the First Lady about the development.

“If you remember vividly, when the daughter of the First Lady came from abroad, the First Lady insisted that her daughter should self-isolate for 14 days. She’s somebody who believes nobody should be above the law.

“She wanted the presidential aide to abide by the guidelines of health officials. In other words, she is simply protecting her family.

“The First Lady deserves to know why security operatives assigned to her were withdrawn. You don’t play with the protection of the First Family.

“It calls for concern. Out of courtesy, the police should have explanation for it. There should never be vacuum in protection. Why did you withdraw and not replace them if they defaulted?”