Nollywood actress, Victoria Inyama, has countered the opinion of her colleague, Anita Joseph, who said that there is nothing like marital rape. 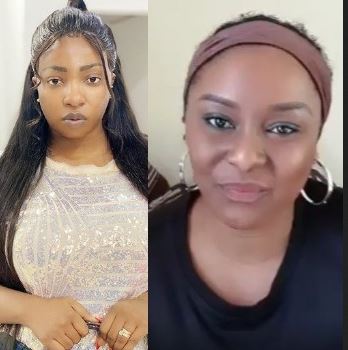 Nollywood actress, Victoria Inyama, has stated that marital rape is possible, adding that it is something she has seen happen.

Over the weekend, Anita Joseph, faulted statement made by some married women that their husbands raped them when they weren’t in the mood for s3x.

In a video she made with her hubby, the actress opined that a woman’s body is the food of her husband and should be ready for him whenever he needs to ”feed from it.” She says the only time she would frown at a husband is when he assaults his wife just to have s3x with her.

The actress who got married to her hubby in February this year, believes it is wrong for women to tell their husbands they aren’t in the mood for s3x. According to her, when a wife is not in the mood, she should just open her body and when her husband penetrates her, she will eventually get into the mood for s3x.

Reacting to Anita’s video, Victoria Inyama said there indeed is a thing called Marital rape and that many married women have experienced and are still experiencing it. She said sex even in marriage should be with consent. She argued that forcefully having s3x with a spouse is another act of domestic violence.

“Can a husband rape? Yes a husband can rape his spouse. It depends. Let me define it. Marital rape or spousal rape is the act of sexual intercourse with ones spouse without the spouse’s consent. The lack of consent is essential here because it does not need to involve physical violence. Marital rape is a form of domestic violence and sexual abuse.

Husbands can rape wife. I do not know about wife raping a husband. The most important thing is consent is needed. A lot of women constantly raped in their marriage. They are so ashamed to even talk about it. I have experienced it and I am learning about it. The trauma and the damage it causes is beyond your understanding.”

Marital Rape is a form of Domestic violence & sexual Abuse, historically sex within marriage was regarded as a right of the spouses,But engaging in the act without the spouse's consent & then Penetrating in now widely classified as Rape! Marital Rape is more widely experienced by women than men. Cultural practices, Religion & societal ideologies contribute to its acceptance. Circumstances do vary but Because it's a Norm Doesn't Make It Right! ⁉️⁉️ #notorapeofanykind⛔#notodomesticviolence🛑 #notospeakingoutstigma🖤❤💙💜 #noshame🖤🖤🧡💛💚💙