As at the time of their arrest, they confessed to having robbed and r*ped many women since they started operations about two years ago. 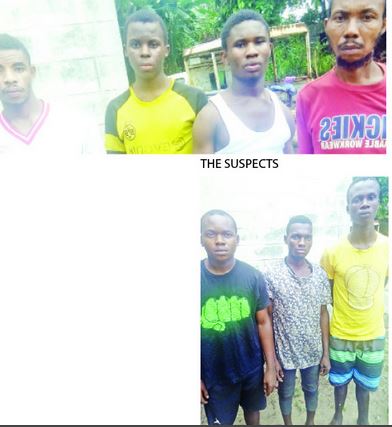 Nemesis caught up, recently, with a five-member robbery gang which specialises in robbing and raping female victims when police operatives, acting on a tip-off, raided their hideout and got all of them arrested. The robbers who revealed their modus operandi during interrogation said they would hide in the bush and wait for their accomplice, a Keke driver, to bring the victims to them. Thereafter, they would attack, rob and rape them.

As at the time of their arrest, they confessed to having robbed and raped many women since they started operations about two years ago. Apart from raping them, they also usually collect the ATMS cards of their victims and clean out their bank accounts before anybody could say Jack Robinson. They used a bush in Okpomuobu Aba, Aba North Local Government Area of Abia State, as their operational base.

Making this known after their arrest, Mrs. Janet Agbede, Commissioner of Police, Abia State Police Command, told Saturday Sun that the robbery gang “would collect their victims’ ATM cards, demand for their pin numbers and go straight to their banks and withdraw the victims’ money and transfer into their own accounts.”

She added that the gang has been terrorising the axis for a long time as many female victims had reported being robbed and raped when they unsuspectingly fell into their hands. Their exploits were made possible by one Chinonso Kalu, a Keke operator who would usually drive the victims to their hideout where they would be robbed and raped by the heartless gang. He was later compensated for the dirty job. He too is under arrest.

How we were robbed and raped – Victims

Maybe after reporting their ordeals at the police station, their female victims also reported them to Amadioha (Igbo god of thunder). And, Amadioha strongly pressed it on the heart of Mrs. Agbede to bring their criminal career to an end.

The cop commander said that the straw that broke the camel’s back happened on April 16, 2020 when they robbed and raped 27-years-old female victim called Ezeanyasor Faith Chioma.

“After robbing her of her valuables, they moved her to their hideout, collected her ATM card and pin number and withdrew N380,000  from  her account at Access Bank in Aba and later raped her,” she said. “During the period, she was held hostage from 10pm to 4am before she was released. Immediately she was released she reported the case to the SARS in Aba on April 19, 2020.”

On going through the report, Agbede said she immediately ordered the SARS Commander, Obioguru Johnbull (Superintendent of Police), and his operatives to storm their hideout. They did and arrested the suspects, namely: Chisom Okonkwo (19); Nsima Innocent (17); Ikeawom Joseph (18); Chidibere Kalu (24) and Austin Ogugua (26). They later confessed to the crime.

Following the arrest, other female victims stormed the SARS office in Aba to identify the suspects as the ones who robbed and raped them. They include: Aruocha Uzoma, Nwankwo Chukwuebuka, Nwachukwu Chinonso, Amidi Sunday and Emmanuel Pleasure.

Prodded to narrate her experience in the hand of the gang, Chioma told Saturday Sun that she was in a Keke coming towards Okpomuoba Aba axis when suddenly they attacked her, dragged her down and took her to the bush. Time was about 6pm. They collected her ATM card, forcefully collected her pin number and withdrew N380,000 from her bank account.

“They came back and repeatedly raped me from 10pm to 4am before they released me,” she added. “The SARS operatives recovered my Samsung phone from Chisom who alongside his gang members raped me. I want justice to be done.”

“We were robbed between April and May 2020 within the Okpomuoba Aba axis,” Chinonso who spoke on behalf of female victims who were similarly robbed and raped, said. “They took our phones and raped us. We later reported the case to SARS Aba and our statements were recorded before the suspects were arrested on May 18, 2020. We were able to identify them when police sent for us.”

Admitting the crime, one of the suspects, Chisom Okonkwo, told Saturday Sun:  “We were five that robbed the victims of their phones before raping them. We have robbed and raped many female victims. We can’t remember the number now. We were the ones who collected Chioma’s ATM card and forcefully collected her pin number and withdrew N380, 000 from her account. We were arrested on May 10, 2020 when the SARS operatives recovered her Samsung phone from our hideout. Before then we had shared among ourselves the N380, 000 that we withdrew. I have been involved in armed robbery and raping of female victims for over two years. I have confessed to police detectives that I raped the victims and they have identified me. I accept that we robbed and raped them.”

Two other suspects, Innocent and Joseph also confessed to participating in the crime.

“We raped Chioma and withdrew her money through her ATM card at Access Bank,” they said. “We were the ones who also robbed Uzoma and Chukwuebuka and collected their phones and raped them and went away with their valuables. We were arrested in Aba by SARS operatives in May and we have confessed to police detectives and those we robbed and raped.”

Chidiebere Kalu, the Keke driver confessed to being an accomplice. “I was the one who used my Keke to drive them to the bush where they were robbed. They always give me N500 at the end of the day after each operation.”

Mrs. Agbede said that the command has deployed police detectives in all the strategic areas of the state, especially the Okpomuobo axis, to tackle robbers like the five-man gang and other criminals. She promised to charge the suspects to court soon.