A Lagos State Traffic Management Authority (LASTMA) official has killed himself after stabbing his live-in lover. 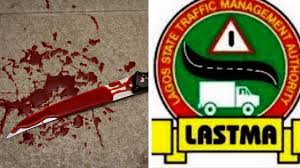 LASTMA
Officers of the Lagos State Police Command have began investigation after a Lagos State Traffic Management Authority (LASTMA), Emmanuel Mekuri, 47 killed himself after stabbing his live-in lover.
According to TheNation, Mekuri, a resident of Araromi area of Morogbo allegedly stabbed himself to death after stabbing his live-in lover, Patricia Ogunshola, 37, on the right thigh. She was later taken to a hospital for treatment.
It was gathered that the incident occurred around 1am in front of Ogunshola’s 13-year-old daughter.
The Nation reports that this incident is the second spousal homicide in two weeks on grounds of alleged infidelity.
Trouble was said to have started between the couple after Ogunshola accused her partner of infidelity.
The duo was said to have had an arguement that degenerated into physical fighting around past midnight.
Although it was unclear which of them introduced a knife in the fight, The Nation gathered that Mekuri stabbed the woman on her thigh and aimed for her head but she fled the room.
Mekuri allegedly stabbed himself on the stomach such that his intentines came out and he died on the spot.
The teenager, said to be the man’s stepdaughter, was said to have raised alarm and attracted neighbours’ attention who called in the police.
Detectives were deployed to the scene immediately and a knife covered in blood was found.
Confirming the incident, police spokesman Bala Elkana, a Superintendent (SP) said investigation was ongoing, adding that the woman was in stable condition.
Top Stories