Hushpuppi, who boasts of over 2.4 million followers on social media, was known to always flaunt his ostentatious lifestyle. 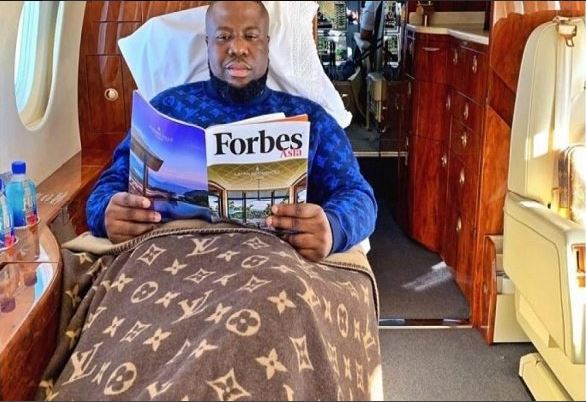 Forbes, the world-famous American business magazine, has said alleged international fraudster, Ramon Abbas aka Hushpuppi, was not on its list of World’s Billionaires.

Hushpuppi, who boasts of over 2.4 million followers on social media, was known to always flaunt his ostentatious lifestyle.

Huhspuppi boasts of many luxury cars including two Rolls Royce, a Maybach,  a Bentley, a Ferarri, Mercedes G Wagon, and many more, some of which were seized when he was arrested by the Dubai Police in the United Arab Emirates last month before he was extradited to the US.

The Nigerian, who is currently facing charges of conspiracy to commit money laundering, among others, in the United States, used strictly private jets for international travel where he videos himself consuming expensive champagne and food.

Some of the photos of his travels he posted on social media showed him reading copies of Forbes magazine.

The magazine famous for listing richest people on earth including Jeff Bezos, Bill Gates, amongst others, however, said in an article on Thursday that Hushpuppi was not on its list of World’s Billionaires.

“Forbes does not currently include Abbas on our list of the World’s Billionaires,” it said.

The magazine, which said richest people on earth are not immune to the coronavirus, said there were over 2,095 billionaires in the world worth over $8 trillion, but Abbas, who was accused of committing over N168 billion scam was not one of them.

According to the Federal Bureau of Investigation, Abbas is alleged to have attempted to dupe an English Premier League football club of £100m (N48.4bn).

FBI said should Hushpuppi be convicted, he risks spending 20 years in jail.