According to Tolu Ogunlesi, a presidential aide, Rotimi Amaechi, minister of transportation, announced this on Saturday. 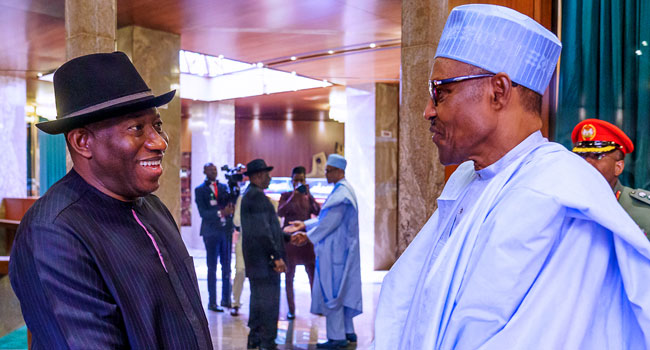 According to Tolu Ogunlesi, a presidential aide, Rotimi Amaechi, minister of transportation, announced this on Saturday.

“BREAKING | President @MBuhari has approved the naming of the Railway Complex in Agbor – the operational hub of #ItakpeWarriRail Line – after former President @GEJonathan. It will be known as the Goodluck Jonathan Railway Station & Complex — Minister of Transport, @ChibuikeAmaechi,” Ogunlesi tweeted on Saturday.

The railway complex in Agbor is the centre of operation which connects the Itakpe-Warri rail line. It is joined by Benin to Onitsha rail, among other segments of the country.

The rail line  is part of the Lagos-Calabar coastal railway project, which cuts across most states in the south-east and south-south.

The project implemented by the China Civil Engineering Construction Company (CCECC) was initiated during Jonathan’s administration.

But in 2016, Amaechi signed a fresh mandate to commence construction of the project.

Buhari defeated Jonathan during the 2015 presidential election, setting a new record as the first candidate to defeat a sitting president in Nigeria.