A woman who gave birth to triplets has cried out on television begging for help to feed her babies. 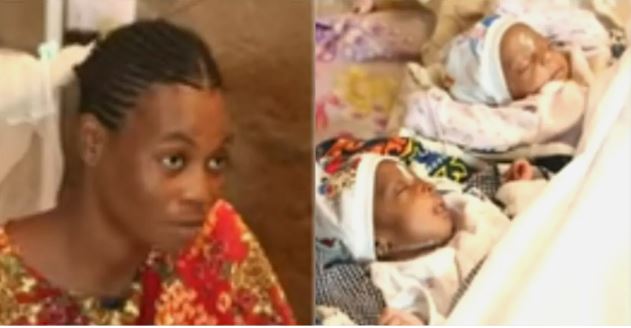 Mary Tago and her babies
A new mother of triplets, Mary Tago has begged fellow citizens to help her feed her adorable babies.
The woman who lives in an uncompleted building is a resident of Sarpeiman at Amasaman in the Greater Accra Region. She has been hit hard with the challenge of providing for her kids.
The mother of triplets' poor background has also compounded her current situation.
Speaking about her depressing condition in an interview, Mary, a trader, told Kofi TV she was selling rice water before she delivered her triplets.
Not only is Mary burdened with the responsibility of providing for her children, but she and her kids also face an immediate problem of eviction from the incomplete building by their landlord.
In the recent interview, Mary also bemoaned the plight of her husband who is jobless. She said her husband is a trotro driver but he does not have a car at the moment.
According to her: ‘‘He sometimes gets out to look for job early dawn but he comes home with nothing, he is really going through hardships.''
Mary lamented about their ordeal and the unbearable burden of fending for the kids after she gave birth to her triplets.
Top Stories