Horror! Man Kills His Wife And Two Children With Machete In Osun


A man has been arrested by the police in Osun state after he reportedly killed his wife and two children. 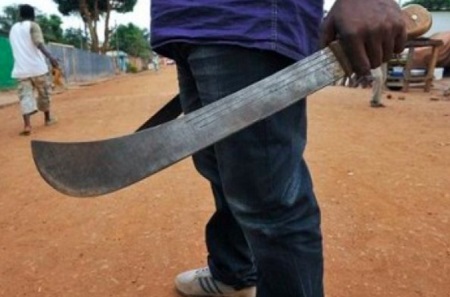 File photo
A man from Inisa town, Osun State, Tunde Oyeniran, has allegedly hacked his wife and two children to death.
According to Punch, Oyeniran, a nurse, allegedly perpetrated the act on Friday, around 11pm, using a cutlass to kill his wife, Sarah, and the other two victims.
He also allegedly inflicted cuts on himself in the hand and stomach and raised the alarm, claiming that his family was attacked by hoodlums.
The Osun State Police Public Relations Officer, Yemisi Opalola, said Oyeniran was arrested where he was receiving treatment.
She said preliminary investigation revealed a foul play, adding that the State Criminal Investigation and Intelligence Department was already investigating the matter.
Opalola said, “From the information available to us, the incident happened around 11pm last Friday in Inisa. The suspect reportedly used a cutlass to kill his wife, Sarah, and the two children living with them.
“Three corpses recovered from the scene have been deposited in a morgue in Ikirun for post-mortem examination. A cutlass was also recovered from the scene. The state Commissioner of Police, Mr Undie Adie, has directed thorough investigation into the incident.”
Top Stories