According to one of the residents, the gully erosion worsened around the year 2000, when hundreds of residents had to evacuate their belongings and relocate after their houses had been destroyed. 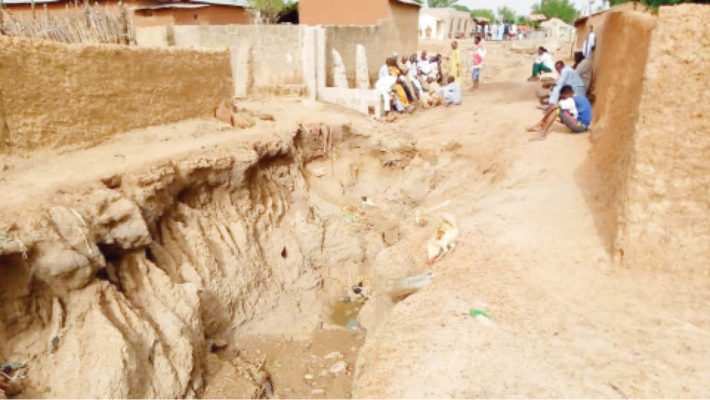 A street cleft in two by erosion in Jauro Musa area

As the rainy season sets in across northern Nigeria, Daily Trust visited a community in Kumo town of Akko LGA in Gombe State, where in 20 years, an estimated 300 hectares of land had been destroyed by gully erosion, in addition to over 300 households that have been forced to abandon their ancestral homes.

Muhammadu Babandudu, 67, alongside his children were busy removing their belongings from the debris of what used to be part of their house at Unguwar Jauro Musa, in Kumo town of Akko Local Government Area of Gombe State.

Babandudu’s rooms and one of the external walls collapsed after the previous night heavy downpour, which also damaged some personal effects.

The Jauro Musa area, where Babandudu has lived with his wife and 10 children for over 40 years, has been battling gully erosion for the last 20 years, during which period over 300 households have been forced to relocate.

According to him, the gully erosion worsened around the year 2000, when hundreds of residents had to evacuate their belongings and relocate after their houses had been destroyed.

“My neighbours have left the area since the erosion began to massively encroach into our houses. Apart from 19 of my immediate neighbours who have relocated, over 300 households have abandoned their houses and escaped to safety,” he said.

Of the original eight rooms in his own house, Babandudu is now left with six, which are in danger of collapsing soon.

Every season, residents of the area raise funds to purchase trucks of rocks to minimize the impact of flood in the area. This has not stopped the gully erosion.

“But as I am speaking with you, we always sleep with our two eyes open whenever it rains, especially in the night. Because the rainwater passes through our homes to reach the huge valley behind the houses,” Babandudu added. 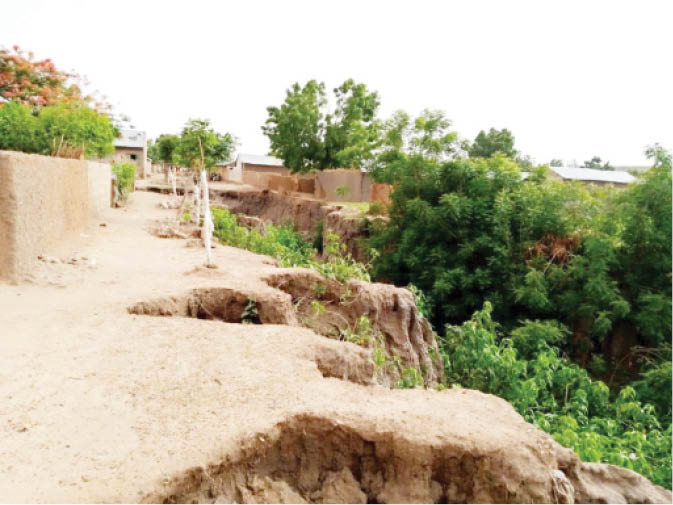 The area is also home to Muhammad Bello Saro, 50, a civil servant, his three wives and 23 children. Already the erosion has affected two rooms in the six-bedroom flat in which they live.

Saro believes the erosion was worsened by floods, which in turn got worse after a 2013 road construction diverted floodwater from the western part of the town to pass right through their houses. 50 households have been affected in Saro’s neighbourhood alone.

“We are still living in the area because we have no option or other places to move to,” he said. “When I moved into this area 25 years ago, the rift behind my house was too small to make a significant impact. But today I already lost two rooms to the gully erosion and have to evacuate our belongings from the other room over the impending flood this raining season.”

He too, like Babandudu, dreads the rains at nights.

Malam Musa Kawuwa, 50, a tailor and farmer, lived with his two wives and 10 children in a 4-bedrooms house he inherited from his father some years ago.

Sometimes in 2014, following a downpour, the whole house was swallowed by the gully erosion. Suddenly, Kawuwa and his family of 13 became homeless. He also lost his 10-hectares farmland.

After squatting in a two-bedroom building, he managed to rebuild his house four years later. But still, the erosion is threatening to swallow his house.

“If nothing is done to address the situation, I may have to relocate again because, as I am speaking with you, the wall of my house is on the verge of collapsing,” Kawuwa lamented.

Hundreds of other residents in Unguwar Jauro Musa of Kumo town are living with these fears.

Residents claim the area was established over 150 years ago alongside ancient Kumo town. However, within the last 20 years, over 300 hectares of farmlands and 300 houses have been destroyed by gully erosion caused by a flood.

People residing in Kumo town are mostly farmers, who ought to be happy during raining seasons. However, residents of Jauro Musa now dread the rains.

Besides residential areas, the flood is also threatening the only public-owned primary school in the community, Jauro Musa Primary School. The school was built by the community before it was taken over by the Akko Local Education Authority.

Now the 700 pupils in the school have to be split into morning and afternoon sessions after the erosion destroyed two classrooms, with two more on the verge of being swallowed. 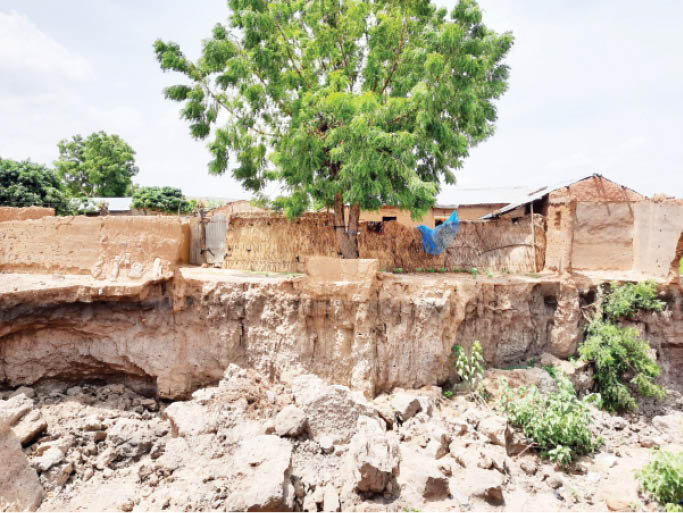 A retired teacher, Malam Yahuza Adamu Saleh, told Daily Trust that the erosion has destroyed a block of classrooms at the school, saying if nothing is done, school-aged children will be forced out of school.

“The erosion, which already claimed two classrooms, is also threatening to consume the remaining classes at any moment. Therefore, our children will have to drop out of school as it is the only public school nearby and most of us are low-income earners and cannot afford the private schools,” Saleh said.

Unwilling to lose their homes without a fight, residents formed a self-help group, the ‘Jauro Musa Concern Forum,’ to combat the erosion alongside other challenges in the community collectively.

The Interim Chairman of the forum, Abdulrasheed Ibrahim Musa, said while they were growing up, the gorge was over two kilometres away from the residential areas.

“But it has now reached us, destroyed many houses, washed away farmlands and affected classes in the only public primary school in the community,” he said.

According to him, the forum also seeks to address the lack of a post-primary school, healthcare centres and water among others in the area.

“There is no single government-owned healthcare centre close to us. The maternity hospital is over two kilometres from the area. Even the primary school was started as a community school before the government took over.

“At the end of primary six, our children have to trek for about three kilometres to attend the nearest secondary school. We also depend heavily on water vendors to get water for our domestic uses,” he said.

Musa said at the association level, they have been contributing money to work in the area to stop the gully erosion “but it is a little effort which gives a little hope that lasts for a few months because the flood would wash it away again after a heavy downpour,” he said.

As such, the residents of Jauro Musa for years have been living in constant fear of leaving their ancestral homes to become Internally Displace Persons (IDPs) in their town of origin.

It was gathered that all the efforts by the community to bring the government’s attention both at the state and federal level to the situation have failed.

However, officials of the state Nigeria Erosion Control and Watershed Management Project (NEWMAP) said they are aware of the situation and have already intervened to solve it.

According to the officials, work has already commenced from the western part of the town to address the problem.

They said work on erosion site near the General Hospital, Kumo, which feed the valley at the Jauro Musa area during raining season, is already ongoing and will soon reach the eastern and northern part of the town.