The mother of a blue-eyed woman who was abandoned by her husband in Kwara has opened up on the development. 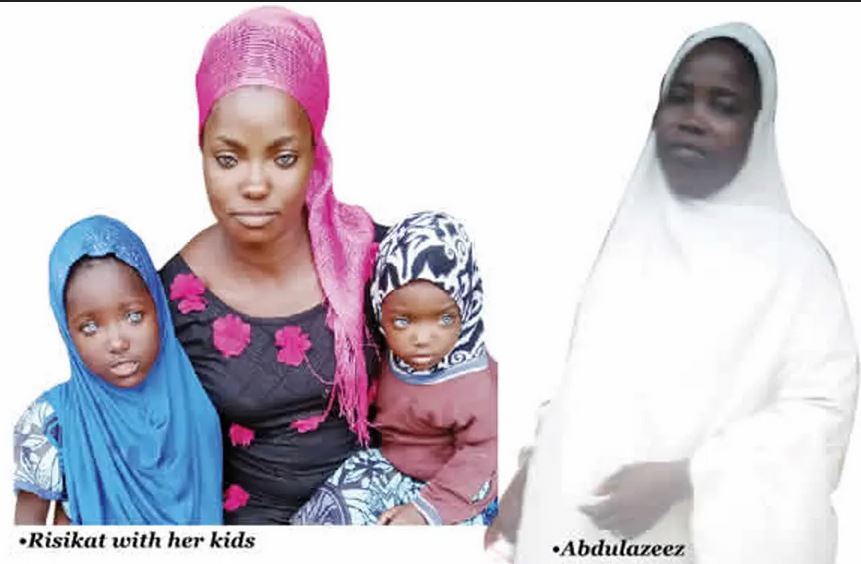 Mrs Saudatu Abdulazeez is the mother of Risikat, the 30-year-old woman who was allegedly abandoned by her husband for having children with blue eyes. She tells TUNDE OYEKOLA she was surprised Abdulwasiu, the husband of her daughter, sent her daughter out of her matrimonial home

What is your name and your relationship with Risikat?

I am Mrs Saudatu Abdulazeez. I am the mother of Risikat; she is my first daughter.

How old is she?

She said she was born with blue eyes. Is her condition hereditary?

No, it is not hereditary. I don’t have it and her father doesn’t have it. But our daughter, Risikat, and her children have it.

Were you embarrassed because you had a blue-eyed baby?

When she was born, we discovered that she had blue eyes. We were surprised because there was nobody that had such eyes in our family. The father does not have them and I don’t have them. After making enquiries from the people around us, we were told that it was not a disease and we became less worried because it did not affect her vision. But when she was at school, she complained that her mates were making jest of her. We took her to the general hospital (University of Ilorin Teaching Hospital) at Surulere, Ilorin for treatment. Doctors told us not to worry as the eyes were normal.

We had no money to pay during the time of the registration for the examinations. So, she did not pay for the two examinations. We later sent her to learn the sale of medicine and we established a medicine shop for her; she operated the business before she got married. She continued to operate the shop after she got married to her husband. However, both husband and wife did not manage the business well and they ruined it.

When the husband sent your daughter out, what did you do?

When she came and told us that her husband told her to go back to her parents’ house, we were surprised that he could behave that way because he struggled a lot before he married her. He made several visits to our house before she agreed to marry him, although, when they got married, Abdulwasiu did not perform his responsibilities well. He was not feeding his family. Although he is a vulcaniser, he didn’t feed our daughter. I’m the one who would buy foodstuffs and take them to their home. My husband, who is her father, would send money to them. We did that for many years. Even as a result of not performing his responsibilities, Risikat didn’t want to have other children for him after Kaosara, but I begged her to stay with him because I didn’t want her to move from one man to another since I didn’t do it. I have stayed in one place with her father since we got married. So, I appealed to her and she got pregnant and had the twins.

Has the family of Risikat’s husband come for reconciliation?

No, they have not come. They didn’t bother to come because they were behind the separation. They were the ones that complained that they didn’t like the blue eyes of the children that my daughter had for their son and were the ones instigating their son to marry another woman who would give their son children with normal eyes and he acceded to their advice. He did what he was taught. I, however, regarded him as someone who has nothing to do because one of the twins, Taiwo, who died, had normal eyes. Of the twins, only the female has blue eyes. But I know that God has something significant to do in the life of the children of my daughter and I pray that God’s promise will come to pass.

If the family of the husband of your daughter decides to come and beg you to take their wife back, will you accept their plea?

It is too late. It is over a year now that my daughter has been with us and they have not bothered to come to us to ask about her and the children. I knew that they would not come. Even Abdulwasiu, who comes to see the children occasionally, would not enter our house. If they come now, my daughter will no longer marry him.