The issue began when Kaisha said she saw water plugged in but wasn’t boiling and decided to fix it properly. 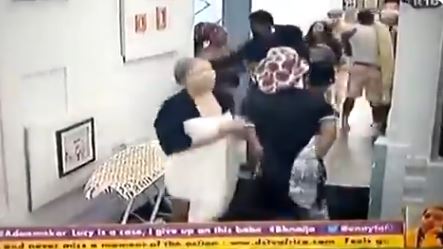 Big Brother housemate, Nengi, may be issued a strike for shoving fellow housemate, Kaisha, during an argument.

The issue began when Kaisha said she saw water plugged in but wasn’t boiling and decided to fix it properly, however, Nengi who thought she disconnected it faulted her action.

This led to both housemates hurling insults at each other while others tried to separate them.

Nengi said, “Kaisha go and work on your character. You are shapeless.”

Kaisha responded, “Go and work on your face like you worked on your Ass. You are a useless attention-seeking girl.”

Nengi also shouted at Kaisha repeatedly to get out of her face but she refused. Nengi then shoved her out of her way.

The punishment for such violent act is uncertain at the moment, as Biggie is yet to address the alteration.

However, it will be noted that the Big Brother’s house rules frown against any act of violence or provocation.

Recall that a similar incident led to the disqualification of ex-Big Brother housemate, Tacha.

Biggie had disqualified her for provocation and violence during a fight with winner of the show, Mercy.