The suspects were apprehended by the police after they were found with three human skulls in Calabar. 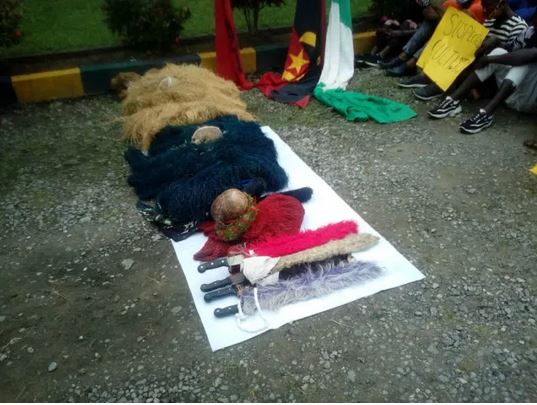 The Cross River State Police on Wednesday recovered three human skulls from 55 suspected cultists it paraded for Cultism and sundry crimes at the Headquarters of the Command.

Parading the suspects, Commissioner of Police, Cross River State, Abdulkadir Jimoh told Vanguard that the security architecture of the command has been rejigged to put the police ahead of criminals in the state.

He said: “On Monday I got information that suspected cultists were driving dangerously, hoisting the black and red flag disturbing the peace along Goodluck Jonathan Road and driving towards 8 Miles. They were seriously pursued and intercepted at 8 Miles.

“When they were arrested and brought to the Headquarters, we have 51 of them in number. Forty-six are males and five are females. The suspects confessed to be cultists from Akpabuyo local government en route to Akwa Ibom.

“They all confessed to being members of Nnabor Confraternity and they were the people responsible for the series of kidnappings and other vices in Akpabuyo local government and by extension some parts of Calabar Municipality.

“The Command will undertake a forensic analysis of the skulls to determine whether they belong to some of these people that have been declared missing or some off the victims they have killed in heinous crimes. They have been profiled and the will face the wrath of law,” he said.

Explaining further he said the security architecture of the command has been rejigged for effective service delivery which he said was now yielding harvest of criminals.

His words:”Prior to my arrival there had been complaints about insecurity such as kidnapping, cultism and other vices in the state. One of the disturbing local governments in my brief which I received in Abuja and here is Akpabuyo.

“Most of the kidnap cases are reported from Akpabuyo local government. As aa result of this I decided to conduct a security survey on Sunday (August 16, 2020). I went to see things for myself, interviewed some people, met with agents of government and the police.

“The information they gave me I have upgraded it into to actionable intelligence that a group of people are planning to disrupt the peace of the state or Abia. They will move to another state to cause mayhem under the guise of cultural troupe.

“This is a strong warning to heads of various cult group operating in state to have a positive change of mental attitude and turn a new leaf or face the full wrath of the law when caught as he will not hesitate to deal decisively with these heartless group of persons no matter their connections".

In the same vein, four other suspects were also arrested for Cultism by the Operatives from Anti kidnapping/ Cultism and during interrogation, all of them confessed to be members of Vikings Confraternity.

Speaking with Vanguard one of the suspects, Mike Okon Asuquo said there was barely a masquerade troupe adding that he was born into it.

Asuquo said: “All these masquerades, I was born to see them from our great grandparents. I don’t know anything about human skulls.

“We took this masquerade from our community town hall. We rented it from the owner who is a member of the village. The masquerade is a tradition of the Efik. My community when they have occasion they play this masquerade. We went to a burial at Obot Akara in Akwa. The human skull is part of the tradition,” he said.