Trouble started when Baale of Oke-odo allegedly stormed the house with some thugs and grave-diggers to exhume two corpses belonging to the family in the old house. 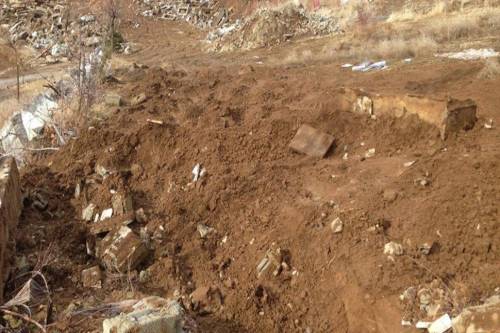 It has been reported that a family in Lagos has cried out over the sudden exhumation and disappearance of the corpses of their lives ones.

The family, whose apartment was at number 1 Ilupeju Street, Ile-epo, Oke Odo area of Lagos, sold the house after the death of two of their family members to raise funds for the welfare of the others.

However, trouble started when Baale of Oke-odo, Saliu Dada, allegedly stormed the house with some thugs and grave-diggers to exhume two corpses belonging to the family in the old house.

The family, who said they were not at the house when the corpses were excavated, stated that neighbours informed them of what happened, testifying that Dada oversaw the exhumation.

A relative of the family said the community head denied involvement in the excavation despite multiple people witnessing the act.

“When we sold the house, the family was making arrangement to dig the corpse before the right owner occupies it.

“While this was on, we heard that the two corpses belonging to us in the house had been dug and the Baale was there.

“There is no way people will come to the house without the Baale knowing about it.

“All our neighbours who were there said they saw the Baale came with people and they were all saying we should go to meet the Baale.

“What we want is for the Baale to give us the corpses and if he does not know, since he was at the scene, he should tell us who exhumed the corpses,” a family member explained.

Another member of the family known as Popoola said the Baale directed the family to one ‘Last born’, who was described as a well-known and influential person in the community.

They said he was at the scene when the excavation was happening.

“When we asked him, he denied knowing about it and said we should get more information from Last born. The people said he was there too when the digging was going on.

They belong to us and there is no reason or ground that anybody will dig out the bodies and deny us of it,” the Popoola family added.

When a phone calll was put across to the Baale, his aide responded to the call but said the Baale was unavailable to speak at the moment, asking our reporter to call back.

The Baale, however, has failed to respond to subsequent calls and messages to his phone.