Governor Orders All Herdsmen In His State To Carry ID Cards


All Miyetti Allah Cattle Breeders Association (MACBAN) have been ordered by a governor to carry ID cards in his state. 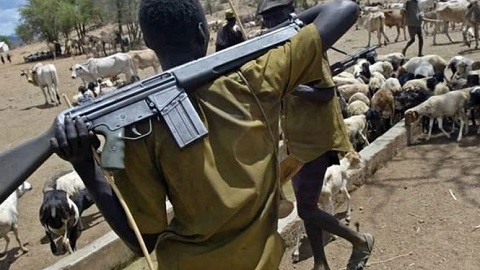 File photo
The Governor of Ebonyi state, David Umahi has ordered all herdsmen operating in Ebonyi to henceforth carry ID cards for easy identification in case of crime.
The governor gave the directive to the leaders of the Miyetti Allah Cattle Breeders Association (MACBAN) in the state after a meeting on Tuesday.
The Deputy Governor, Dr Kelechi Igwe, announced the new directive while briefing newsmen on the outcome of a special security meeting convened by Governor David Umahi at the Government House, Abakiliki.
The meeting had the leadership and members of the state chapter of MACBAN in attendance.
Igwe said that the state government was worried over reported cases of killing of Miyetti Allah members, attack on communities by persons suspected to be Miyetti Allah members, destruction of farm crops and other valuables and incessant cases of rape in the state.
“The leadership of the various Local Government Areas (LGAs) should immediately liaise with Miyetti Allah leadership to provide identity cards for herders operating in their domains.
“The various communities in the state are empowered to arrest any under-aged cattle rearers grazing around their communities and hand them over to the police for prosecution, .
“The chief herder, who is the custodian of such under-aged person, must be prosecuted by the police in accordance with the law,” he said.
The deputy governor said that herders should be held responsible for attacks on communities in the state and destruction of farm crops by their cattle.
“Rape cases are not exempted from this as the perpetrators must be produced within seven days for arrest and prosecution.
“Community leaders, LGA chairmen, Development Centre Coordinators, among others, should take responsibility and produce those who attack herders and their cattle for prosecution within seven days.
“Herders should henceforth reside in communities where they rear their cattle and any one bearing arms on the roads in areas where infractions occur would also be prosecuted by the police,” Igwe said.
He said that rearing of cattle within the state government house, centenary city, churches, mosques, schools, among others, had been prohibited and offenders to be prosecuted within seven days.
He said that herders would, in the magnanimity of the state governor, receive COVID-19 palliatives and benefit from the government programmers on Small and Medium Scale Enterprises.
Top Stories