Heartbreaking! How A Pregnant Woman, Two Kids, Others Perished In Ondo Accident 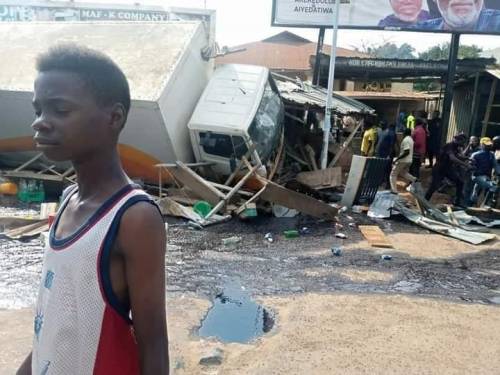 According to a report by SaharaReporters, a yet to be identified pregnant woman was among victims of a fatal auto accident, which occurred on Saturday in Ondo State.

The accident occurred at Ikare Akoko in Akoko North Local Government Area of the state.

SaharaReporters gathered that the woman also lost two of her male children in the crash.

The family was among seven casualties involved in the accident.

Three other persons sustained injuries in the accident, which was caused by a truck conveying diesel, which rammed into some shops in the commercial area of the town, causing destruction.

He said, "The bodies of the victims have been deposited at General Hospital in Akure.

"Those who sustained injuries are currently receiving treatment in the hospital."