Many Families Rendered Homeless As Mass Demolition Begins In Abuja


Some inhabitants of the village, on sighting bulldozers, constituted themselves into small groups and began hauling stones at the machine and the personnel. 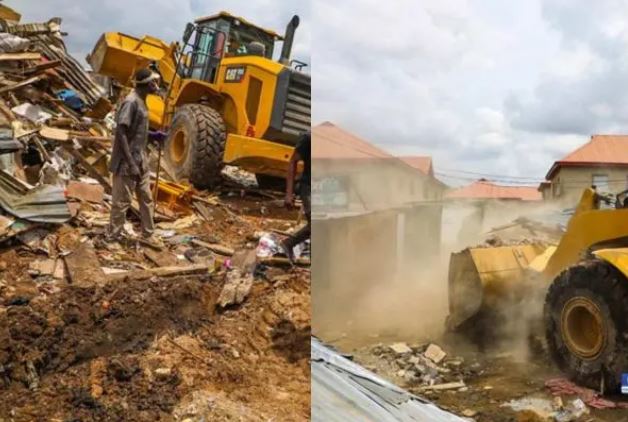 Many Families Rendered Homeless As Mass Demolition Begins In Abuja

The Federal Capital Territory Administration (FCTA) has commenced mass demolition of purported illegal houses in the territory, leaving many homeless.

At the start of the demolition exercise, residents of Utako village in Abuja, challenged the personnel and offered resistance, though efforts of security agents quelled that.

Some inhabitants of the village in the early hours of yesterday, on sighting bulldozers constituted themselves into small groups and began hauling stones at the machine and the personnel.

At this point, the residents were seen making last-minute moves to salvage their belongings, children also seen sitting beside a few of their properties had to watch over their belongings as their parents raced to retrieve more items before they got destroyed by the claws of the bulldozer.

After the initial setback, the machine rode on almost all the shanties, makeshift houses and all attachments, leaving only houses owned by Abuja original inhabitants.

Asked why the selective demolition, director, Department of Development Control, Muktar Galadima, who led the exercise, explained that houses belonging to Abuja natives were not touched because their compensation was yet to be completed and resettled.

Chairman, Task Team on City Sanitation, Attah Ikharo, while corroborated the position of the director.

Muktar Galadima, stated that the demolition will put an end to land racketeering in the FCT, as he stressed that there was a need to correct all infractions and abuses of the Abuja Master Plan.

“The FCTA has already made it clear that the actions and activities of land racketeers cannot and will never be condoned.

“That is why we are removing all those illegal developments,” he said.