The suspects said they prefer Indian hemp to cigarette because the latter is injurious to their health. 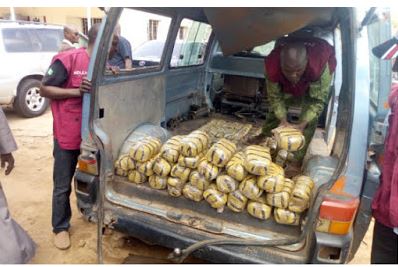 Three suspected armed robbers yesterday told a Magistrate Court in Osogbo, Osun State that they prefer Indian hemp to cigarette so as to avoid health problems.

They were apprehended when they caused panic in the community on 3rd of September, 2020 at about 1:00am by openly brandishing charms and dangerous weapons after smoking Indian Hemp.

Some residents of the community said Olalekan who is 22-year-old joined the gang of Olamide and Samson, both 25, and that the trio caused confusion in the town.

They were arraigned for attempted robbery, unlawful possession of arms, charm and wraps of weed suspected to be Indian hemp.

The Police Prosecutor, Inspector Elisha Olusegun told the court that the accused persons attempt to commit armed robbery in the community.

The accused persons pleaded not guilty to the offence leveled against them as they explained that they smoke the weed because they prefer Indian hemp to cigarette because cigarette is injurious to their health.

The their Counsel, Tunbosun Oladipupo applied for the bail.

In his ruling, Magistrate Ishola Omisade granted them bail in the sum of N300,000 with one surety in like sum. He adjourned the case till 8th of October, 2020.