LASEMA in a preliminary report signed by its Head, Public Affairs, Nosa Okunbor, said the tanker was loaded to its 20,000 litres capacity. 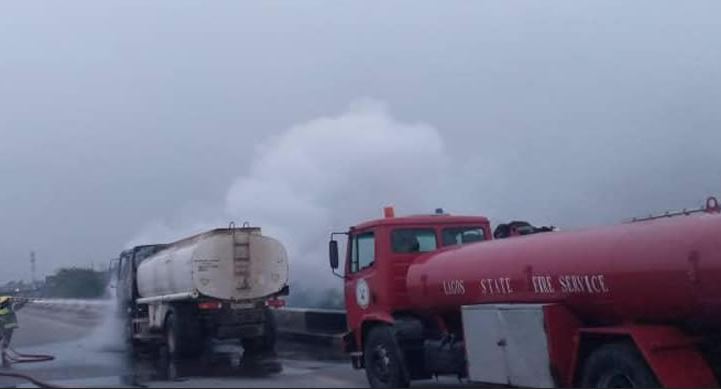 According to The PUNCH, fire engulfed a fuel tanker on Eko bridge inward Apongbon, Lagos State on Sunday.

It was gathered that the fire incident happened around 6 am.

As of 9 am, the Lagos State Emergency Management said the fire had been put out.

LASEMA in a preliminary report signed by its Head, Public Affairs, Nosa Okunbor, said the tanker was loaded to its 20,000 litres capacity.

He said the fire damaged the cabin and engine portion of the oil tanker where the fire broke out.

Okunbor said, “Upon arrival at the scene of the incident, it was discovered that a tanker with an unknown registration number loaded with AGO was on fire as a result of an electrical fault from its engine, thereby obstructing vehicular movement along the road.

“However, no loss of life nor injury sustained at the scene of the incident. LRT, LASG fire service, LASTMA, and Police are responders at the scene, working together to put out the fire and evacuate the tanker off the road in order to restore normalcy along the axis and prevent any secondary incident.

“The tanker has been recovered off the road. secondary incident averted and road set free for vehicular activities.”