Despite several efforts by the police and local security agencies such as the Agbekoya, So-safe corps and vigilantes to stop the killings , Dosumu , a cultist and drug addict, continued to invade the communities at unexpected hours to hack anyone that came his way to death. 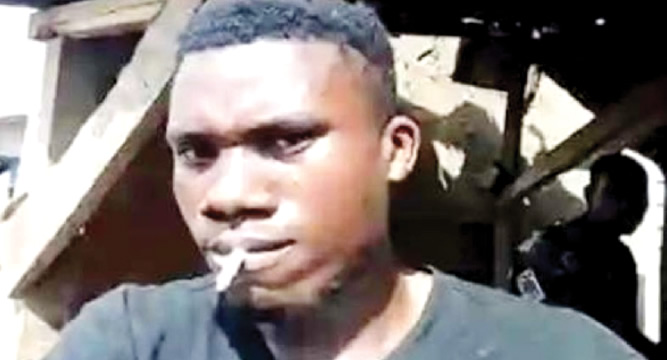 DAUD OLATUNJI writes on how a suspected serial killer in Iperu and Ogere communities of the Ikenne Local Government Area of Ogun State, Feyisola Dosumu, was arrested after killing eight people in the areas

Tracking a serial killer in Ogun State,  Dosumu Feyisola,  was not an easy task for the state police command. Policemen led  by the Commissioner of Police,  Edward Ajogun, on many occasions spent  nights and days in the communities, yet  the suspect always escaped.

Despite several efforts by the police and  local security agencies such as  the Agbekoya, So-safe corps and vigilantes to stop the killings , Dosumu , a cultist and  drug addict,  continued to invade the communities  at unexpected hours to  hack  anyone that came his way to death.

The suspect,  who had  been playing hide-and- seek with the security operatives and residents of  the Ogere, Iperu, Ilisan and other communities; met his waterloo on August 25, when the state police command employed technology to smoke him out of a thick forest which he had  turned into  his abode.

For five months, Dosumu, who was popularly known as ‘Spatan,’ had  been a major pain in the neck of  the residents of Ikenne communities due to his nefarious  activities. While many residents in the communities had to  abandon  their homes to live in safer places, some, who  had nowhere to go, stayed put  in those communities, but  slept  with   one eye closed because nobody could  predict when the suspected serial killer would appear.

His whereabouts were unknown for weeks. Even, when a bounty of N500,000 was placed on him, Dosumu seemed  to be a dribbler whose hideouts remained  a mystery  for months.

He, however, met his waterloo when the Special Anti-Robbery Squad led by Muhammad Tijani tracked him with the help of a drone to his hideout inside a bush in Ogere, where he had created a settlement for himself.

Dosumu’s adventure of killing people of the communities started about four months ago when he reportedly went on the rampage and killed six persons in the communities.

It was reported that Dosumu  killed two private guards working at a farm and one elderly Togolese on  April 30, 2020.

It was further gathered that another unidentified teenager was also killed at Ogere on   May 1, while he reportedly hacked three others to death at Iperu Remo on May 2..

About three months after the first attack, Dosumu  struck again in the communities on  August 1, 2020 when he hacked another two to death.

The PUNCH  gathered that following  another   attack, residents and security operatives  launched a serious manhunt for Dosumu who was said to be suffering from a mental disorder.

It was also gathered that the suspect was hiding inside a thick forest around one of the   communities.

Some of the places Dosumu was suspected to be hiding were uncompleted buildings and sometimes inside the ceiling of  newly completed ones and this was why it was difficult for the police to track him down.

When The PUNCH  alongside the police  visited some of the buildings, it was observed  that Dosumu inscribed different images on the walls.

While speaking on the development , the Divisional Police Officer of Ogere, Ayinde Abiodun, explained that not less than eight uncompleted buildings had  been uncovered by the police which were suspected to have been hideouts of Dosumu.

The DPO said, “Wherever he lived, he would surely draw something just to make us know that he had  lived there before.

“He used to hibernate in many uncompleted buildings which we uncovered. Everywhere he went, you would always see his signs and there were times he would hide inside the ceiling of a newly completed building; this was the reason it was difficult to track him”

When the team got to the  bush where Dosumu was caught , nobody would have thought that a  human being would live  there  because of its thickness. The place  was said to be the place where Dosumu was finally caught through the help of a drone.

It was however learnt that Dosumu was shot when he tried to attack a  policeman  with a broken bottle and a cutlass. He  died as a result of gunshot  injuries he sustained.

In  the forest Dosumu had made  a settlement for himself and he was living like  a ‘king of the jungle’  who had  everything he needed to survive. It was observed that at the hideout, Dosumu had a kitchen  where he cooked, with a gas cooker.

Our correspondent observed  that there were  leftovers of fried chickens in his abode  before his arrest. It was observed that the suspect designed the hideout to suit his mode of operation as he was so tactical in his approach; he cleared enough space in the bush, dug trenches in order to avoid police arrest.

The PUNCH  also observed that the suspect had  a copy of his poster which the police printed when he was declared wanted. The poster was pasted in his makeshift room in the jungle.

The Commissioner for Police, Edward Ajogun,  disclosed that the police had to employ a technology to fish out  the serial killer when it became difficult for them to apprehend  him  where he was hiding  in the bush .

Ajogun said this when he led his men to convey the killer’s corpse in a van to the Governor’s office, Oke Mosan, Abeokuta, where the state Governor, Dapo Abiodun, was briefed on the operation that led to his arrest and killing.

The police boss explained that the suspect was killed in his dungeon built in the bush around Ogere Area after two days operations.

He said, “His module operandi is this:  He lived in bushes  in the communities. From time to time,  he sneaked out and hacked  his victims to death”

He stated, “We employed the reactive means of always combing the bush each time this thing happened. So, we started  this on   April 21 when  the serial killer  killed another victim.

“Then the governor called  that I should try my all means to make sure I put a halt to the senseless killings. Of course , the Inspector General of Police also directed that we must fish out the killer.  So from April  21 till date , we had been in that bushes looking for him.”

Earlier before the death of the serial killer, the traditional rulers in the area  had  expressed concerns  over the inability of police  to arrest Dosumu.

The Ologere of Ogere, Oba Oladele Ogunbade  had said the people in the communities were  looking for all means to ensure the serial killer was arrested.

The monarch,  who lamented that Dosumu had become a problem in the community lamented, “We have been  ahead of the situation, but, he has not been arrested by the police.

“He is a problem to the communities  and we are looking for  a way and means to make sure that he is arrested. We pray that he is caught one day”.

When asked to examine the efforts of the police on the development , the monarch said “The police know their job, we cannot teach them their job, but, the only thing is to arrest him.  There are no other means than to arrest him.”

Also, the Alaperu of Iperu, Oba Adeleke Idowu-Basipo said the local hunters, alongside other security operatives including the police were on 24-hours surveillance to ensure Dosumu’s arrest.

He stated, “We thank God because we have mobilised our hunters, the vigilante group, the corps and even the police are keeping 24 hours vigilance.Their patrol team are always on the ground.”

Oba Idowu-Basipo said “Giving us information is very vital, we need to be updated on the activities of the man and how he moves  around for us to  be able to get him arrested, but, we should be assured that we will soon arrest the man.”

staying in one place. I don’t know if people are giving him information and we don’t know. “

In the same vein, the lawmaker representing the   local government the state House of Assembly, Kunle Sobukola  said  he  was in constant dialogue with the commissioner of police to  ensure the suspect’s arrest.

He said, “We are in constant dialogue with the commissioner of police and the chief security adviser of the state governor with the view to capturing him.

The Transition Committee  Chairman of  the Ikenne Local Government, Rotimi Akinsanya, explained that the government set up local intelligence network seeking  for vital information that would help in tracking the suspected cultist.