Soldiers in Umuahia have been forced to make a u-turn after protesters barricaded the road. 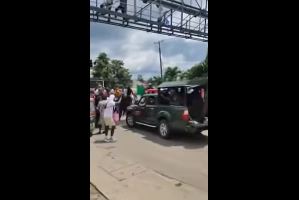 Soldiers forced to turn back in Umuahia
A large crowd of protesters have stopped soldiers from driving through them during a demonstration against police brutality in Umuahia.
It was gathered that the #EndSARS protesters had blocked the road during protest, however the soldiers insisted they have to pass through that road.
The protesters who barricaded the road refused them using the road and insisted they follow another route.
After hesitation, the soldiers were forced to reverse their car and follow another route.
Nigerian youths are protesting against police brutality nationwide.
Watch video below:
Top Stories