The #EndSARS protesters have consistently maintained that they had no leader who would negotiate with the government for the purpose of implementing their demands. 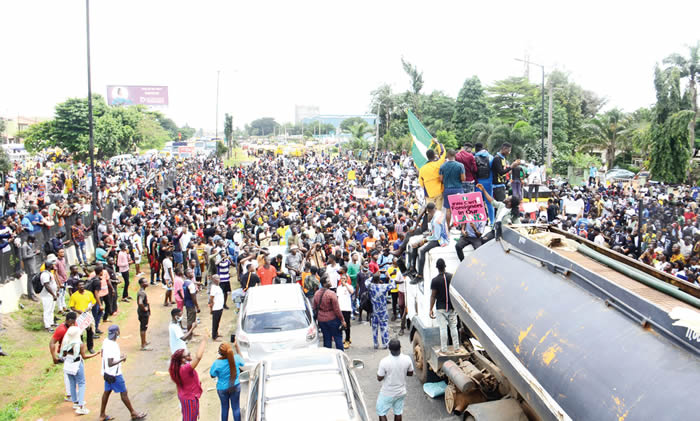 Ali Ndume, the Chairman, Senate Committee on Army, has proffered a way forward for #EndSARS campaigners.

He urged young Nigerian celebrities, who identified with the recent #EndSARS peaceful protesters, to make themselves available for negotiation with the Federal Government on the implementation of their five-point demands, The PUNCH reports.

The youths had made a five-point demand which was presented to the President, Major General Muhammadu Buhari (retd.), through the Governor of Largo’s State, Babajide Sanwo-Olu, last week.

The #EndSARS protesters have consistently maintained that they had no leader who would negotiate with the government for the purpose of implementing their demands.

But addressing journalists in Abuja on Friday, Ndume said the young popular Nigerians in the entertainment industry and civil society groups, sighted during the peaceful protests should interface with the government.

He said, “Prominent celebrities who took part in the last #EndSARS peaceful protests before it was hijacked by hoodlums, should represent the youths and negotiate with the Federal Government as a way of resolving the ongoing imbroglio.

“The government needs a team to negotiate with on how to implement the five-point demands as well as other programmes announced for the youths by the President.

“There is no way the government would implement the lofty demands of the youths without the representatives of the beneficiaries.”

Ndume commended the President for heeding the advice to address the nation.

He said the speech addressed all the salient issues agitating the minds of Nigerians especially the youths.

He urged the #EndSARS protesters to suspend their actions on the streets to prevent hoodlums from further looting.

He called on the National Assembly to expedite action on making sure that adequate compensation for the victims of police brutality was included in the 2021 national budget.