Olakunle who joined the #EndSARS protests shortly after his wedding at the Federal Marriage Registry, Ikeja, has spoken up. 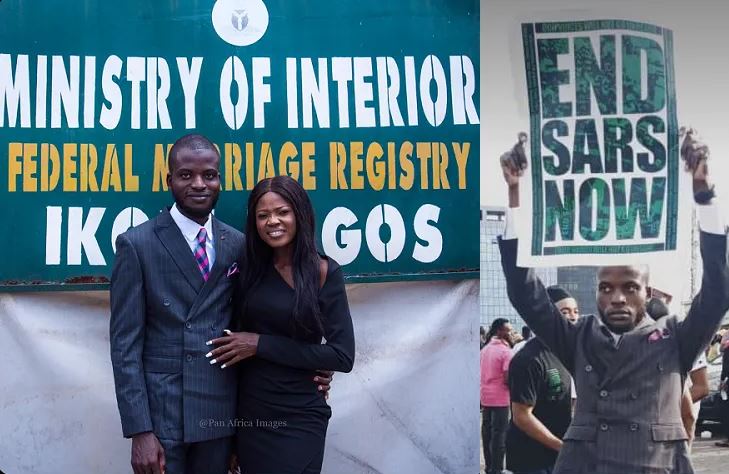 Hanson Olakunle joined the protests on his wedding day

A Nigerian man who joined the #EndSARS protests after his wedding has told his story in this interview with The PUNCH.

Hanson Olakunle, a 29-year-old software consultant, whose photos went viral after he and his wife joined the ongoing #EndSARS protests shortly after their wedding at the Federal Marriage Registry, Ikeja, Lagos, tells ALEXANDER OKERE why he took that step

My name is Hanson Olakunle. I’m a software consultant. I currently work with a prominent information technology company in Ikeja. I am from Ondo State and I’m 29 years old.

Some photos of you joining the #EndSARS protest shortly after your wedding at the Federal Marriage Registry, Ikeja, Lagos, went viral recently. Was it what you originally planned to do?

I got married to my wife on Wednesday, October 14, 2020 at the Federal Marriage Registry, Ikeja, Lagos. Yes, it was my actual plan to get married on that day. Joining the protest was the uniqueness of the event. Throughout last month (September) and up till this period, I have been busy with the project I am working on. So, I actually had no time to do anything. I was quite interested in joining the protest but I couldn’t because I’m not self employed. But October 14, 2020 was a free day, a one-day leave from work for my wedding. But I had also planned to have a meeting somewhere at Lekki Phase 1 and I thought after the wedding at the registry, I would go for the meeting.

But when I got to the toll gate, it was blocked, so I had to come down from the vehicle and trek to the other side of the road. I saw the energy of young guys protesting and putting resources together. If you were there, you would have seen the organisation, aside from the time they gave to make sure that their voices were heard. At some point, I got ashamed of myself for not even putting much effort into it. So, I decided to protest in my own little way by raising a placard, taking a picture with it and uploading it on social media. I felt that no matter how busy I was, I could just take out some time, take a picture with a placard and share it on social media, and let the conversations continue.

Did your wife join the protest too?

She was the one that took the picture.

Did she express any fear when you decided to join the protest, especially since you just got married?

She knows my kind of person and understands what I love to do naturally. So, when I informed her about the idea, she agreed even though she wouldn’t want to be part of it as she is reserved. She agreed, took the picture and we recorded some videos together, even though I didn’t share them.

How did your family members react when they saw your photos had gone viral?

Thank God for my siblings; they were able to make my mum understand that that was the way it should be. However, my mum called me and told me to be careful; she is a pastor. But I understand that a man can only die once. Something must kill a man – it could be what he does or what he does not do. If I don’t protest and something happens to me tomorrow, I will still die.

What were your concerns about the state of affairs in Nigeria that motivated you to join the protest?

Education is one major issue. If the government has the right plan for young Nigerians, a lot of things will be easy for us. Life would have been easier for us. Quality education propels us to be more presentable globally. Security is also important. I move around Lagos and other states in the country. I have experienced robbery and when I see a policeman, it doesn’t make a difference. When I was robbed, they (policemen) told me to write a statement at the police station and that was it. I will say we lack adequate security in the country.

I will like to see a changed Nigeria, not just for the government but also for the young people in the way we think and expect our government to behave, and in the way we act. I think it is more than changing a structure or system. I think it has to do with our thought pattern.

Did you feel fulfilled joining the #EndSARS protests?

I felt fulfilled. Apart from the fact that my pictures are on the Internet, I felt fulfilled that I exercised the right I have and lent my voice to a protest I know is genuine.