Popular American rapper, Cardi B has broken her silence after being compared with Erica on Twitter. 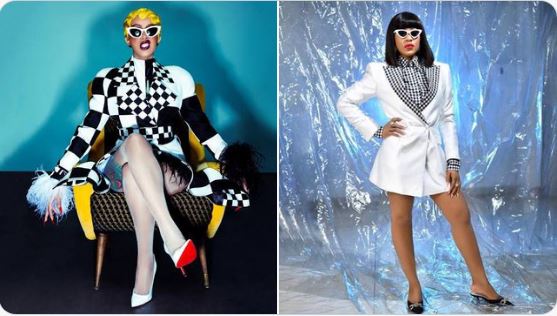 Cardi B and Erica
American rapper, Cardi B has given a rather encouraging response after being compared to BBNaija's Erica Nlewedim.
The comparison has to do with their fashion style.
A user had taken to microblogging platform Twitter to upload photos of Cardi and Erica, in an attempt to mock the fashion sense of the reality tv star.
Placing a photo of the US rapper beside that of Erica, the social media user wrote;
“Grammy style Grandma style,” respectively.
The Grammy winning rapper, however, praised the Nigerian reality TV star, describing her fashion sense as different and classy.
She wrote;
“I like it tho. Its different and classy, mines is different and edgy.”
See below: